The more ammunition you give a soldier, the more he’ll use!” Despite their continued post-war use of the seven-shot Spencer repeater, this was the general complaint, along with being shackled by a severely restricted budget, which kept the American military hierarchy from adopting a new repeating rifle for years after a costly Civil War. The eventual adoption of the single-shot 1873 Springfield “Trapdoor” carbine remained the cavalry’s primary weapon throughout the Indian campaigns. However, after the deadly results and many casualties suffered by the Army during the Great Sioux War of 1876, and to a lesser degree in the following campaigns against the Nez Perce, Ute and Shoshone tribes, the Army began to realize that American Indian warriors were outgunning troopers in too many instances, and the single-shot Springfield was not altogether that different from the muskets of more than a decade earlier.

Forward-thinking officers relentlessly searched for a repeating carbine that was simple to use, yet rugged enough to endure the hardships of mounted frontier service. Although the 1871-’73 field trials with the bolt-action Ward-Burton carbine proved unsuccessful, cavalry officers like Col. Ranald MacKenzie and Ord. Capt. Otho E. Michaelis continued to press for a “magazine arm.” They finally got their break when U.S. Ordnance officers took interest in a bolt-action rifle exhibited by Winchester at the Philadelphia Centennial Exposition of 1876. The brainchild of Benjamin B. Hotchkiss, an American who worked from the basic idea of France’s Fusil Gras Modèle 1874 M80 rifle to create his own bolt-action system. It was designed to handle large-caliber, military metallic cartridges, employing a five-round tubular magazine in the butt stock, similar to the earlier Spencer but non-removable. Also, like the Model 1865 Spencer, the more powerful Hotchkiss carbine could be handled as a repeater, or with its magazine cut-off, function as a single loader, keeping the magazine in reserve.

When Congress passed the Army Appropriation Act of 1877, which gave the military $20,000 to manufacture a magazine gun, the Ordnance Department quickly moved to take advantage of this financial windfall. Winchester had bought the rights to manufacture Hotchkiss’s rifles from the inventor, whose patent was first issued in November 1873, with improvements granted in 1878. Ordnance officers wisely agreed to combine the production capabilities of Winchester and the Springfield Armory in order to fabricate the Hotchkiss.

Working together, Winchester, produced the major machined parts like the action, magazine, trigger guard, butt plate, partially finished stock, and fit the barrel to the receiver, while Springfield Armory, utilizing parts from its 1873 trapdoor, assembled the gun with a proofed barrel, barrel band, stock furniture and sights, along with performing final fitting, finishing and inspection. By the end of June 1879, a total of 500 cavalry carbines and the same number of infantry rifles were completed.

Hotchkiss cavalry carbines had 24-inch blued round barrels, color case hardened receivers (stamped with Winchester and Hotchkiss address and patent dates from 1860 to 1878) and a nickeled brass forearm nose cap. Each carbine had a sling ring on the stock’s left side—and on the First Model, a button-type circular knob on its right side that served as both a cut-off device and safety. This knob however, caused weakness in the stock and led to breakage, so it was replaced with levers on each side of the receiver in the Second Model, introduced in 1880.

The Model 1879 rear sight—adapted for the 24-inch barrels (Springfield carbines had 22-inch tubes)—were graduated to 1,400 yards, and are stamped “H.C.” (Hotchkiss Carbine), since the Hotchkiss carbines were intended to fire the .45-70 rifle cartridge, rather than the carbine’s .45-55 round. A total of 501 First Model Hotchkiss martial carbines were produced and only 400 of the Second Model. These were sent to various troops for trial, however results were mixed, and the Hotchkiss was eventually phased out.

Between 1879 and 1899, Winchester turned out approximately 84,555 sporting and military Hotchkiss rifles and carbines. However, despite the small number of military carbines produced, and largely unsuccessful results, they may well be best known as America’s first bolt-action magazine carbine. 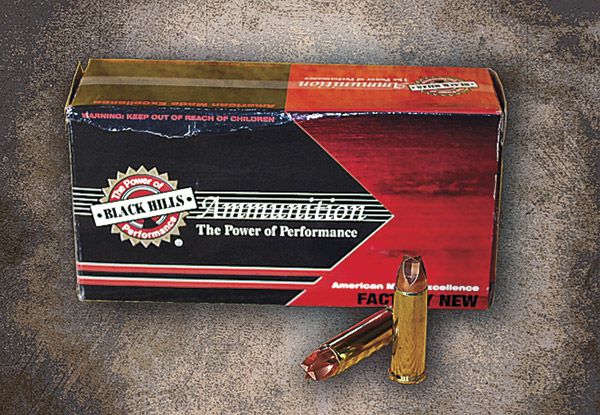 Designed with large machined flutes and a small frontal area that produces a large temporary cavity and deep penetration while moving out at a muzzle velocity of 1,275 feet per second, it produces 361-foot pounds of energy. This hot “Honey Badger+P” round, along with Black Hills Ammunition’s 125-gr. JHP+P, its 148-gr. Match HBWC, and the reduced recoil, 158-grain CNL Cowboy Action load offers .38 Special shooters a variety of fun rounds to play with.