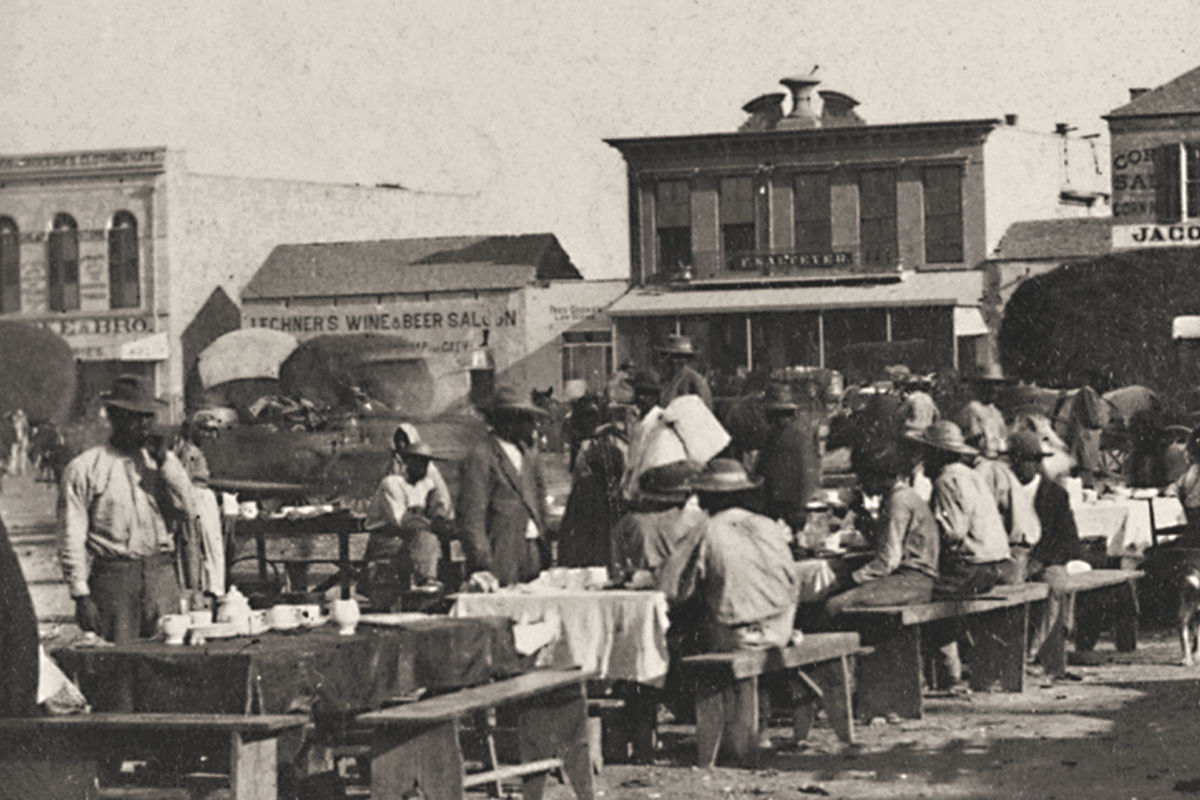 For two centuries, locals and visitors to the public plazas of San Antonio, Texas, dined on the famous fiery cuisine.

San Antonio, Texas, became famous for its “Chile Queens” in the late 1800s and early 20th century, but historians believe the renowned local cuisine was prepared and sold publicly in the Mission City as early as 200 years ago. Over time, the locations changed, but in the mid- to late-1800s chile con carne stands at Military Plaza offered Mexican specialties. Spicy aromas scented the air, women called from their carts in Spanish and English to attract customers, and music filled the plaza. In this wondrous culinary scene people dined on tamales, enchiladas, eggs, beans and chile con carne.

While other Texas cities had chile con carne stands, none were like San Antonio’s. Journalists informed their readers that no trip to San Antonio would be complete without a stop at one of the chile queen stands. While the term “chile queen” conjured up tasty thoughts of visiting San Antonio, the term was also applied to fallen women of Hispanic descent. Fort Worth had its own “chile queen,” named Susie Barton, who worked in Hell’s Half Acre. Although Susie might have been spicy, it wasn’t because she sold chiles…if you know what I mean.

There were three classes of queens, according to the San Antonio Light in 1892. The first type acted out of necessity, was from the countryside, and probably had run away from home and needed work. Next was the Mexican senorita, whose parents likely owned the stand and were nearing retirement. Lastly, there was the true queen, who was raised in the art of deception and was generally known to be “fly” or flippant. The true queen was between 16 and 20 years old, generally good looking, nicely dressed and polite. The girls worked from 8 p.m. and remained at their stands until the wee hours of the morning. They earned a dollar or a dollar fifty per day, and the “most educated in their business” made 20 to 35 dollars per week, according to the article.

Sadie Thornhill-Rosenbaum was well-known as the “queen of queens” because of her cooking talent, beauty and vivaciousness. Before her chile queen reign, she appeared on the stage. In 1895 Forest and Stream recalled dinner at Sadie’s during her tenure: “If Sadie be not one of the features of interest of San Antonio and one of the leading citizens of town, to what or to whom shall we ascribe that honor? Of course a chile supper at Sadie’s casa was to be the close of ceremonies in San Antonio. Sadie was going to give us this supper herself, but we couldn’t allow that. Sadie was still doing business at the old stand, and so was her Mexican cook Pancho. ‘Pancho is so funny when he’s drunk,’ said Sadie, philosophically.” The story went on to note that when Pancho wasn’t under the weather from “aguardiente” aka liquor, he cooked the best eggs, chile con carne and other delights. 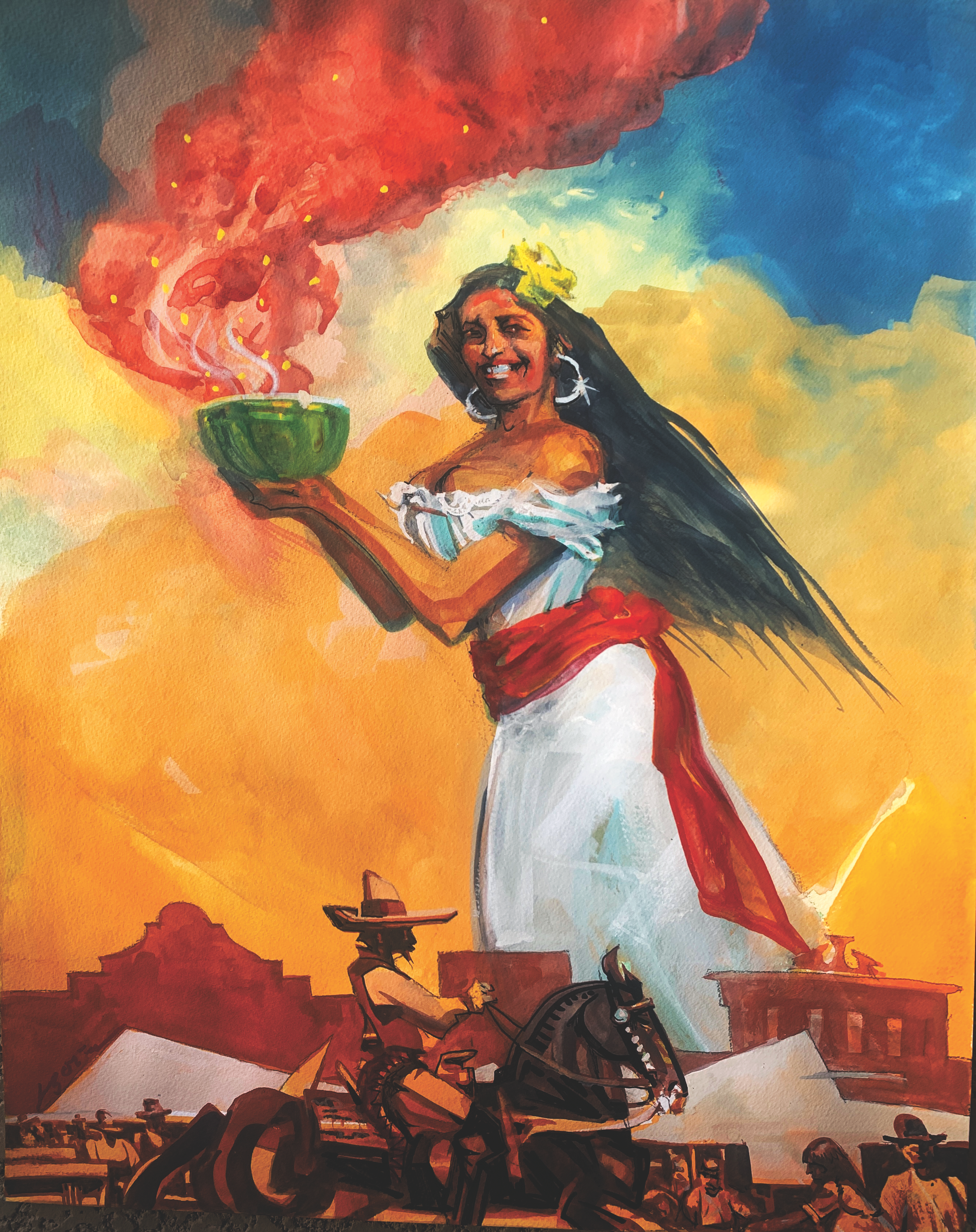 When the men from Forest and Stream departed from Sadie’s stand, she bid them adios and pinned a fresh flower to a buttonhole on each of their suits. They concluded, “Sadie is not to be misunderstood. She is simply unique, the last type of vanishing class which has no precedents, which summons no comparison, and needs no comment. After this, where else in all the world shall one buy his chile supper!” Sadie was the charming hostess of the chile stand, and they considered her the last in a long dynasty of chile queens. No other stand compared to hers, but alas, marriage interrupted the celebration of taste buds from her stand. In 1892 Mrs. Sadie M. Thornhill was the last queen at 304 Alamo Plaza, and in 1894 she married Frank Swales and her reign ended. Sadly, so did her marriage when Frank abandoned her in 1897, and she went back to calling herself Thornill, which is how old-timers recalled her in their stories.

Marta Garcia, another early queen, was a tall, slender, black-eyed senorita who was second only to Sadie. Other queens included Rosa, Ella and Jovita, who served many customers on the plazas. Jovita was remembered for her small stature and quaint calls of “un medio tamales y chile gravy, un plata chile con carne y frijoles.” She also called, “Dame dos blanquillos y chile gravy y metrais dos tortillas tostada.” She asked if anyone wanted an order of tamales with chile sauce, a plate of chile con carne with beans, or eggs with chile sauce and toasted tortillas. Other women included Mrs. Rosaria Spania and Teresa Gonzalez. On a June evening in 1986, Marta and Teresa were arrested for fighting and abusive language, but the recorder later dismissed the case.

Not all the queens were of Mexican descent; others included Agnes Pearson, sisters Rose and Lulu Davis, and Jennie Johnson. Some of these queens were also employed at the variety theater, where they got a little disorderly at times. Jennie was 17 years old and was often in the company of another teen named Lillie Atkinson. In 1892 the two were living on Concho Street with Lulu Davis and, likely, Rose Davis. Lillie and Lulu were arrested in September that year for being drunk and disorderly. It was soon learned neither had parents and that they had grown up on the streets. The city was perplexed as to what to do with them. The following year, Lillie and Jennie gave up their chile business and began running the streets at night. Seen drinking beer and being raucous, they were arrested as vagrants.

Because of the unsanitary conditions at some of the chile stands, the city opened and closed them over the years. In April 1896, the San Antonio Express grew frustrated over the closing of the chile stands and urged the city council to allow the re-establishment of them. They suggested the council require a license for all stands, with a nominal fee, so they could be regulated. If a stand was found to be unsanitary or disorderly, then the city could revoke their license. The newspaper reported: “The most potent step in connection with the first requirement would be the dethronement of the ‘Chile Queens.’”

The following year the talented senoritas were back, and that same newspaper ran a glorious story about them. It reported that tourists, after seeing the Alamo, must partake of a Mexican supper served by the chile queens. It reported, “This was in the late ’80s, the palmy days of the chile queens, when their fame had spread…they were idealized as stunning creatures, with rich, brown skins of the tropics and languorous grace and bewitching black eyes of Spanish donnas.” According to the story, there were six senoritas, and one called to her server, “Jesus, andale, dos platas de chile con carne, y dos tamales can chile gravy, de enchiladas tortillas, y dos tazas de café.” She called for two plates of chile con carne, two tamales with gravy, enchiladas and two cups of coffee. The article continued: “The fiercely burning chile con carne agonizes the tourist, [who] manages to struggle through the tamales by drinking a great deal of water.” The article went on to say that, by the 1890s, the fame of the original queens faded as they were forced to leave the backdrop of the Alamo. They continued on, but it was never quite the same without the majestic background.

Author William Brann, who lived in Texas, wrote about the chile queens in 1898. He stated, “We must have several days—and nights—for sight-seeing in San Antonio. We must dream about the ruined missions where, before our grand-sires’ day, the savage was taught to humble himself before the sacred cross; about the Alamo, that charnel house of chivalry. We will be shown a dozen different places where Bowie bled and Crockett died; but no matter—it’s all holy ground. We must have a Mexican supper in the open air and a talk with the chile queens. We must have hot tamales, with ice cold beer on the side to temper the internal fires, listen to the music in Alamo Plaza and witness the Battle of Flowers.”

The Daily Express wrote, “Nearly all of the queens and vendors of the ‘hot stuff’ will move… Although the chile stands have been moved from their plazas in the past ten years, they have lost none of their attractiveness, and the quality of the tamales and other edibles remains as good as in the past.”

The chile queens remained on the Military Plaza, but moved to various locations through the years as the city progressed. Later, the chile stands lined Pasquale Square, but in January 1900, they had to move to make way for progress. Nearly all of them moved to East Street, between Commerce and Buena Vista. It was also around this time that the word “chile” was changed to “chili.”

The stands were closed again, but in 1904 the San Antonio Women’s Club reintroduced their “chili queens” back to the plazas after they were closed again for health reasons. Each Wednesday evening the women offered chili, tamales and tortillas served under the old torch lights under the stars. The chili queens appeared again in 1916 on Alamo Plaza, and the newspaper noted, “Beginning this week, she will serve chili and frijoles in the good old way from open-air stands. This practice, having been discontinued because of demands for sanitation and progress will be restored by the Women’s club.” In 1925 the chili queens appeared again, but this time on Haymarket Plaza and offered a nightly rendezvous of “chili victuals al fresco” that included tamales and enchiladas.

While the true glory days of the queens happened in the 1800s, the queens and their stands lasted until the 1930s. In 1938, a headline in the San Antonio Light read, “S.A. Plaza Chili Queens Still Reign.” The article noted that while the queens remained, their domains were greatly reduced, and they were also now called “Baratillos,” which were individual kitchens housed in a large building and each offering their own fare. By 1939, San Antonio’s mayor wanted to bring back the days of old with open-air chile stands. In 1940, the San Antonio Light wrote, “Alfred Rodriguez is said to be infusing the forlorn chile queen crowds with the same hoop-la that characterized their opening season last summer. His simple trick is to mass the troubadours and have jam sessions with Mexican canciones.” Seeing the need, Mayor Maury Maverick said, “If we can get the chili queens back on the plaza, it will revive one of San Antonio’s most romantic and colorful mementos of the past…” A committee was formed and some chili stands appeared on Haymarket Plaza, but they were short-lived, and by 1941, they faced the same sanitation issue as in the past, and that was the last revival of the queens.

The word chile refers to the pepper itself when it’s spelled with an “e” at the end. If it’s spelled chili, with an “i” at the end, it refers to the dish of meat and chile peppers. The spelling differences also spilled over when it came to the Chile Queens. In the 1800s, the spelling was tied to the actual chile itself. It later changed to reflect the dish, chili. Add to that simple misspellings, and the word is interchanged during the 1800s and 1900s. By 1904, the word chili began replacing chile when referring to the queens. Today, both words are used to describe these colorful women of
San Antonio’s past.

Sherry Monahan has been researching and sharing the culinary history of the American West for over 20 years. She feels that the food and beverages people enjoyed and survived on tell a great deal about the people. Regional dishes emerged, classics were reinvented and native dishes were introduced to pioneers.