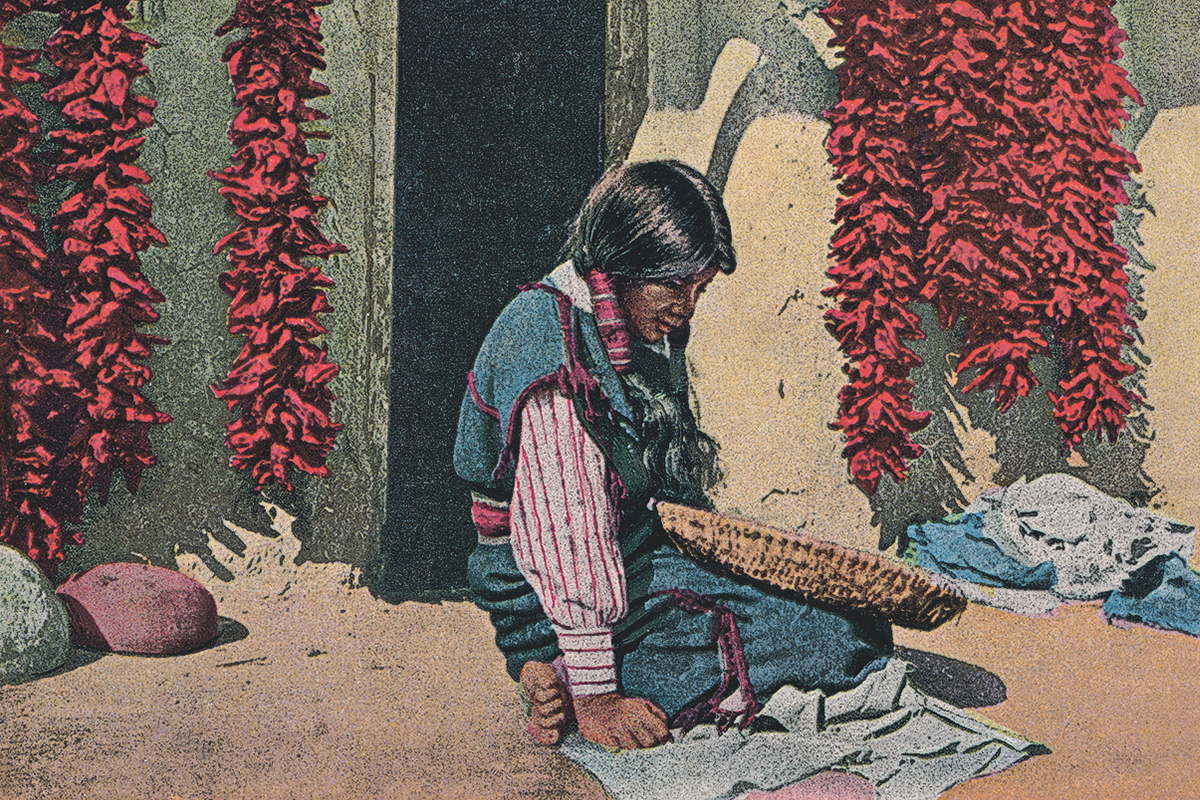 Ever since Don Juan Oñate brought the fiery fruit to Nuevo Mexico in 1598, the chile pepper has defined cuisine in the Land of Enchantment.

New Mexico’s food history is heavily influenced by its people, including the Hopis and other Native tribes as well as the Mexican people. Red, and later green, chiles played a large role in the local cuisine. Dishes like green chile stew, chile con carne, chile rellenos and posole are some of the most popular dishes enjoyed then and now.

In 1874 the Las Vegas Gazette listed New Mexico’s natural agricultural resources, which included grapes, corn, barley, beans, pinon nuts, onions and chiles. The article noted that the chile or pod pepper was of excellent quality and was grown all over the state. “It is said to excel in quality that raised any where in the States, on account of its mild nature, and is extensively used in cookery as a standard dish.”

Newspapers, like the Albuquerque Morning Democrat listed a weekly market review to allow its readers to see what was available. An 1895 list included butter, cream cheese, eggs, olives, lemons, ground red chile pepper and whole ground red chile pepper. Green chiles also were sold at the local markets in the late 1800s. They were so prolific on Theodore Roualt’s Las Cruces garden that he canned some as an experiment. He processed them at Mesilla Valley Canning Factory, where he already was canning tomatoes. He stated that canning the peeled peppers preserved their flavor, and in 1898, he put up several hundred cases. They were a huge success and he sold almost the entire lot, so he planned on canning over 4,000 cases in 1899. In 1905 when a rival Los Angeles cannery claimed it was the first to can Mexican peeled green chiles, Roualt objected to the claim and stated that he was the first person to can them.

Green chiles were used in a variety of dishes, but green chile con carne was a popular dish in the late 1800s. It was served at many restaurants, including the Bon Ton in Santa Fe. The restaurant received chiles from Blas Sandoval of Pena Blanca, who brought his wagons to town and sold them to the owners. The local paper noted, “If you want a genuine dish of green chile con carne, go to the Bon Ton restaurant, where they are experts at the business.” They also sold tamales, enchiladas, fresh mountain trout, chicken, posole, chile verde, menudo, chicharrones and “any other Mexican or Spanish dish ever heard of.”

As the turn-of-the-century neared, Mesilla Valley had grown into a chile-producing area where peppers were raised and canned. The local paper noted the peppers were always in demand, and the canning was very profitable. It reported, “Last year we imported large quantities of the large Mexican peppers in cans, which are quite spicy.”

One man, whose last name was Barnes, shared his thoughts on chiles, but not about their spice. While spending some time in the Socorro jail, Mr. Barnes claimed the chiles caused his consumption disease. The local paper noted in jest, “Let some able chemist analyze red pepper at once.”

Chiles are also used in chile rellenos and huevos rancheros. This is an old recipe from La Fonda in Santa Fe.

Place roasted peppers in a bowl and cover with plastic wrap; let them sit until soft. When cool enough to handle, remove the skins. Make a slit in one side from top to bottom and remove the seeds. Fill each chile pepper with 1 tablespoon grated cheese. Roll in flour, dip in beaten egg, roll again in flour. Brown in butter.