It happened all across the West: a spark from a stove or fireplace set one wooden frame building on fire, and with dry wood, lack of firefighting resources and sometimes wind, the spark often led to a conflagration that could take out many adjacent buildings, even entire business districts. Cripple Creek was one of the most prosperous mining towns in Colorado by 1896, when not one but two devastating fires swept through the town. They happened in April, just four days apart.

The first blaze started in the middle of the town’s central business district at the Central Dance Hall, on April 25, 1896. The blaze began at about 1 a.m. and spread quickly when the volunteer firefighters ran out of water. Before long, other gambling and parlor houses had been consumed by flames, and other buildings were demolished when firefighters used explosives to blow them up while trying to stop the path of the fire. By 5 a.m., the fire was out, but the devastation was widespread. More than 300 buildings were destroyed and two people died.

The mining community had barely accepted the reality of the fire damage, when on April 29 a kitchen fire at the Portland Hotel quickly consumed the hotel and spread to other businesses including the Booth Furniture Store, El Paso Lumber Yard and the Harder Grocery store.

Both fires were accelerated by the dynamite stored in buildings throughout the town, which led to bigger, more devastating fire activity. In the second fire, a 700-pound dynamite stockpile at the grocery store certainly contributed to an increase in destruction.

When the ashes in the second fire had settled, Cripple Creek realized that more than a thousand houses had been destroyed, and about 5,000 people were homeless. The destruction of the business district covered some 40 blocks, and the total damage was estimated at $3 million. The number of people who died isn’t clear, but certainly there were two deaths in the first fire and at least four in the second. The number of explosions and the extreme fire conditions made it impossible to truly know whether there were more victims.

Miners and mining camp residents began rebuilding almost immediately, often using brick rather than wood as a key component of new structures, because the fires didn’t have an effect on the mines. The mining activity at Cripple Creek had started with the El Paso mining claim filed by Bob Womack on October 20, 1890. His ore assayed at $250 in gold per ton, and the run was on. Within a decade, miners pulled more than $18 million in gold from nearly 500 mining properties in the Cripple Creek District.

Today, the Cripple Creek Heritage Center’s displays highlight the history of this gold camp. During the summer, tours are available of the historic Mollie Kathleen Mine. Nearby Victor also has a rich mining heritage. Learn more at the Victor Lowell Thomas Museum.

In its heyday, the district had three railroads and two electric trolley systems. The “Gold Belt Line” narrow-gauge Florence and Cripple Creek Railroad linked the gold camp with Florence, Colorado, by climbing through Phantom Canyon. You can drive the route of this old railroad by taking the Phantom Canyon Road, but be forewarned, it is steep, narrow and not for anyone who dislikes heights, one-lane roads with two-way traffic or blind corners! For adventurers, however, it is an awesome drive. 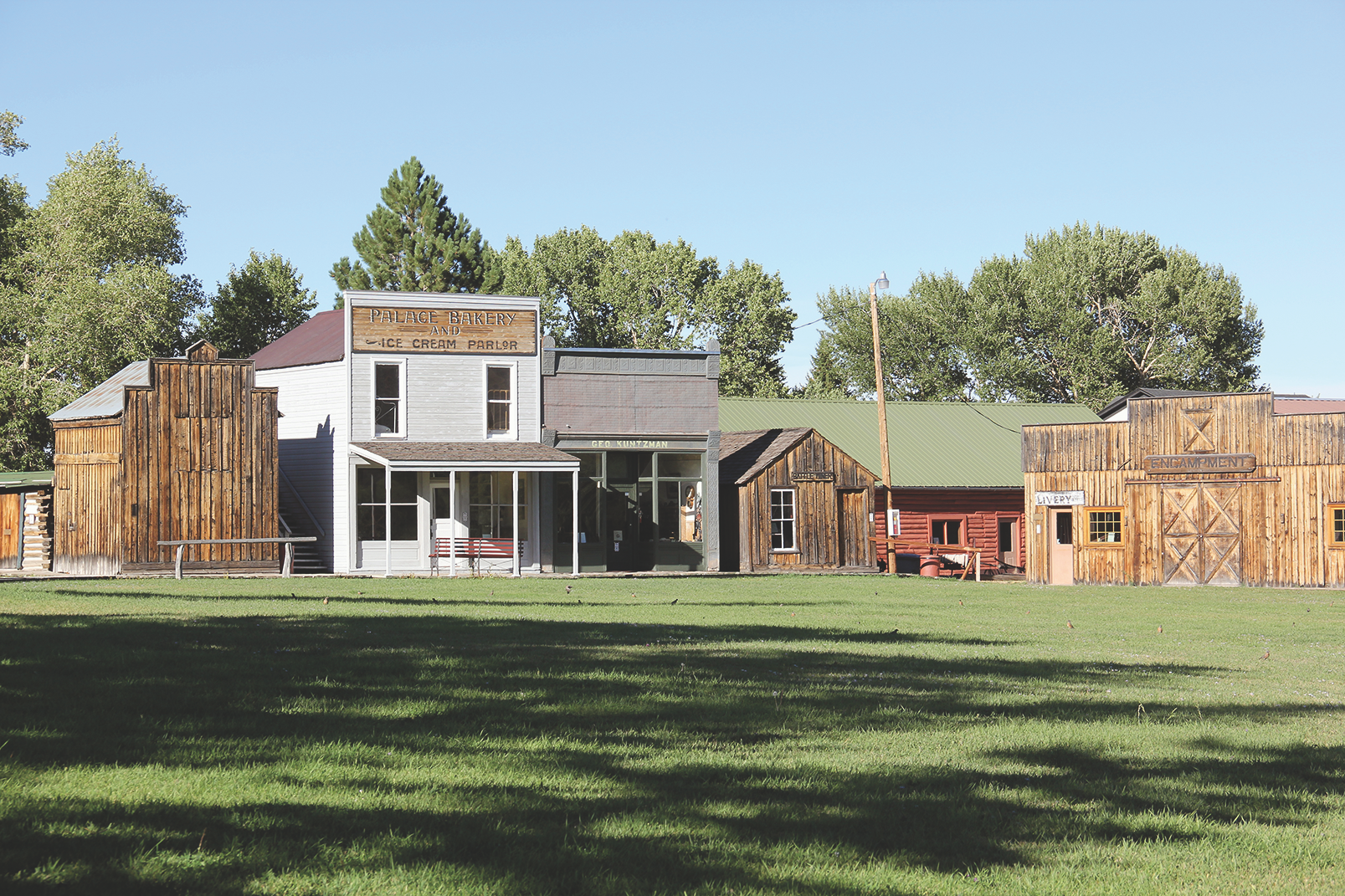 As you travel north from Cripple Creek through Kremmling and Walden, Colorado, you are on a route speculators and miners took when they abandoned Cripple Creek after the devastating 1896 fires to find their luck at the next big strike: the discovery of copper in what became the Grand Encampment Mining District.

Edward Haggarty herded sheep, but his primary interest in the Sierra Madre range of southern Wyoming was the search for minerals, and on a spring day in 1896, he found the mother lode—a copper deposit that would be developed as the Rudefeha Mine (named for the men who backed his mining work—Rumsey, Deal, Ferris and Haggarty). In May of 1897, the word was out, and men who had rushed north from Cripple Creek staked the town of Grand Encampment at the foot of the mountains. Miners and boomers came quickly—many of them like Milt Englehart and Edward Parkison from Cripple Creek. They opened stores to serve the mining industry and brought newspaperman Grant Jones up from Cripple Creek as well.

Jones took over the promotion of the area, quickly getting articles placed in newspapers from Philadelphia to Denver.

Jones would ultimately open his own paper, the Dillon Doublejack, published in the town that grew closest to the mine. In addition to the Rudefeha Mine (which later became the Ferris-Haggarty), other copper mines were quickly developed and spawned the towns Battle, Copperton, Elwood and Rambler.

From its founding in 1897 until 1908, Grand Encampment was the hub of the copper district. Stagecoach service provided a link to the Union Pacific Railroad at Walcott Junction, 40 miles to the north. Freighters like Gee String Jack Fulkerson hauled goods to the mines and mining camps and returned to the North American Copper Company smelter with loads of copper ore. But that transportation was difficult—both costly and dangerous. So the company hired the Riblet Tramway Company from the Pacific Northwest to build a 16-mile-long aerial tramway that could transport the ore from the Ferris-Haggarty to the smelter that had been constructed along the Grand Encampment River near the town. This engineering marvel was the longest aerial tramway in the world at the time. It operated from June 1903 until August 1908.

Grand Encampment never suffered a major town fire in its heyday, but the smelter that was so essential to production of the copper ore had three blazes. The first in 1906 caused a temporary suspension of work, but the plant was repaired and smelting resumed. Then two more fires in the spring of 1908 caused more extensive damage and rendered the smelter inoperable. By then the price of copper had dropped to a level that made it impractical to rebuild the smelter, and the copper boom went bust shortly thereafter.

The railroad that town promoters had worked to attract and build arrived in town too late to be used for the transportation of any copper ore, but the Saratoga & Encampment Railway (the S&E called the “Slow and Easy”)served the community for nearly seven decades providing both passenger service and hauling freight, primarily livestock being shipped to and from markets like Omaha and Chicago. 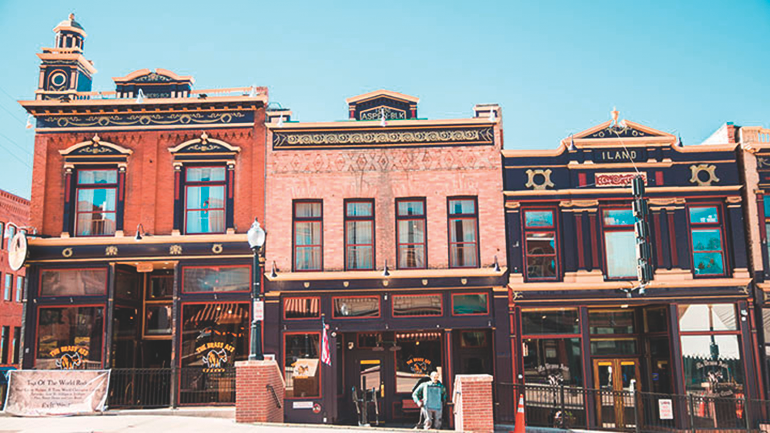 The Grand Encampment Museum interprets the history of the Grand Encampment Mining District. The museum has a new diorama depicting the 16-mile-long aerial tramway as well as one of the original tramway towers, plus three replica towers that have original cable and ore buckets. Also on the grounds at the museum are original buildings from the town of Battle, homestead and stagecoach cabins, a one-room school, a two-story outhouse and a caboose from the S&E Railway.

Today Cripple Creek and Encampment could not be more different. Cripple Creek is one of the Colorado towns that allows casino gambling, so it is still a bit of a booming place; its close proximity to Denver and Colorado Springs also ensures a busy atmosphere. Encampment’s economy is now supported by ranching and tourism, but it is far enough off the beaten path that it has retained its very small-town atmosphere. Both are high mountain towns. Cripple Creek is at an elevation of over 9,400 feet, and Encampment is over 7,300 feet, so in both places you will definitely get to breathe some Rocky Mountain air (even if it is thin at such elevations).

Ranching near Kremmling, Colorado, is not for the faint of heart since the mountain town receives its fair share of snow every winter. When the Wolford Mountain Reservoir construction began, it was apparent some historic ranching structures would be affected, and that led residents to move them from their original locations to the Heritage Park Museum. Among the historic structures at the museum are the Hermitage Ranch House, the MacElroy Livery and the town’s railroad depot.