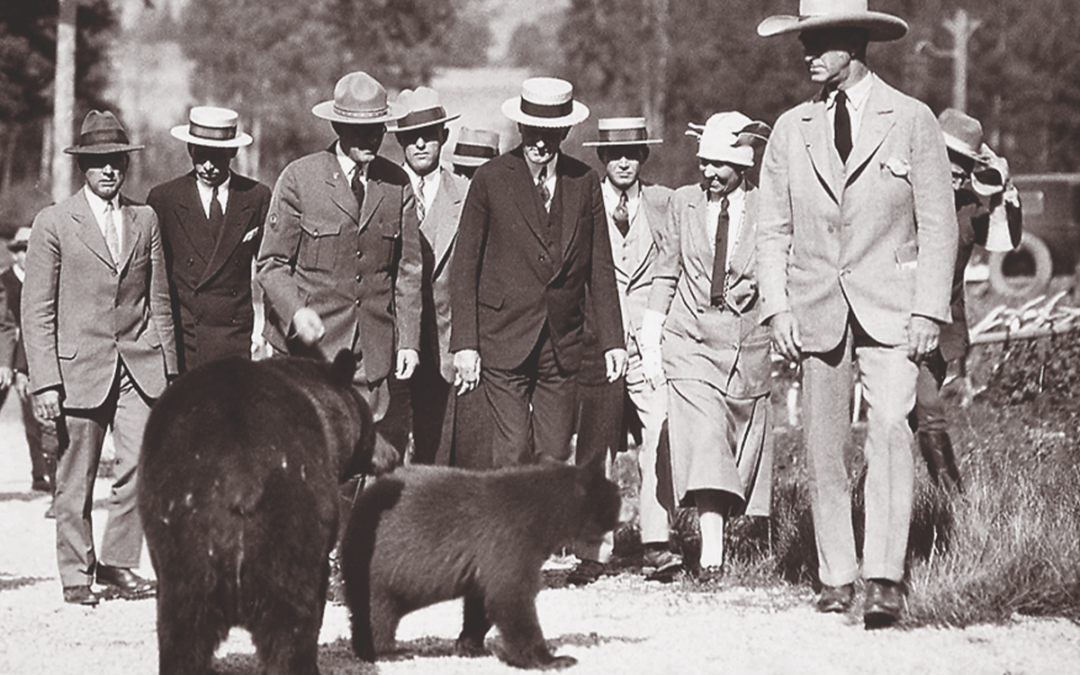 Ferdinand V. Hayden, head of the U.S. Geological and Geographic Survey of the Territories, led a scientific expedition to the northwest corner of Wyoming Territory in 1871. The artist and the photographer who accompanied him carried the tools of their trades and documented the
trip with a series of photographic images and sketches—later to become incredible watercolor paintings.

Artist Thomas Moran sketched and later painted the ethereal beauty of the area: massive waterfalls, stunning multicolored canyon walls, geyser basins. At the same time, photographer William Henry Jackson captured images that also became iconic. And Moran kept a journal of their travels. The men in this scientific expedition successfully relayed their journey to a wider audience when they completed the expedition. They developed not only art and photographs but an improved map of the region.

Hayden himself said that when considered in terms of scientific value, “The geysers of Iceland…sink into insignificance in comparison with the hot springs of the Yellowstone and Fire-Hole Basins.”

Their work set a tone for scientific research and exploration, and most importantly, it established the Yellowstone region as one of national significance, leading to the establishment of the ecosystem as the nation’s first National Park on March 1, 1872. It was recognized by President Ulysses S. Grant, who signed the Yellowstone National Park Protection Act for the “benefit and enjoyment of present and future generations.”

Travelers to Yellowstone for the past century and a half have followed the footsteps of Hayden, Jackson and Moran and also documented the wonders of Yellowstone on sketchpads, with cameras (now with cell phones) and certainly in their writings.

Moran wrote: “The Mountains south east of our Camp & on the road to the lake looking toward the Yellowstone Country glorious, & I do not expect to see any finer general view of the Rocky Mountains.”

The Magic of Yellowstone

I first drove the figure-eight road system of Yellowstone as a child with my family in the 1960s. I remember a few key things from the trip: the massive structure of Old Faithful where our family, an aunt and uncle and some cousins sat on the grass and ate bologna sandwiches; Old Faithful spouting high into the air, hissing and seeming to smoke as the steam rose; the yellow, red, orange colors of the Grand Canyon of the Yellowstone and the sound of the crashing water; and feeding the bears (which was a common practice in those days).

We saw lots of black bears as they sat begging beside the road. We gave them the last piece of one of the bologna sandwiches and about 30 minutes later my cousin Curtis was rolling on the backseat floor of our car whining that he was going to starve because we gave that last sandwich to a bear. (He didn’t, and years later the practice of feeding the bears ended to the bears’ good health and fortune.)

My next memorable trip to Yellowstone took place in 1990 when I had a chance to horse pack into the backcountry. We left from Buffalo Bill’s old hangout at Pahaska Teepee, at the east entrance to Yellowstone, rode north, camped for a week exploring along the Lamar River before riding over Mist Creek Pass, through Pelican Valley and back to a trailhead.

Most people who visit Yellowstone spend time in the major visitor areas: Canyon, Old Faithful, Mammoth and Lake Yellowstone, and at the significant geyser basins, most particularly the active Norris Geyser Basin. Just a very small percentage get into the true backcountry, so as a result, much of that country is much the same as it was 150 years ago when the region first received national park status. 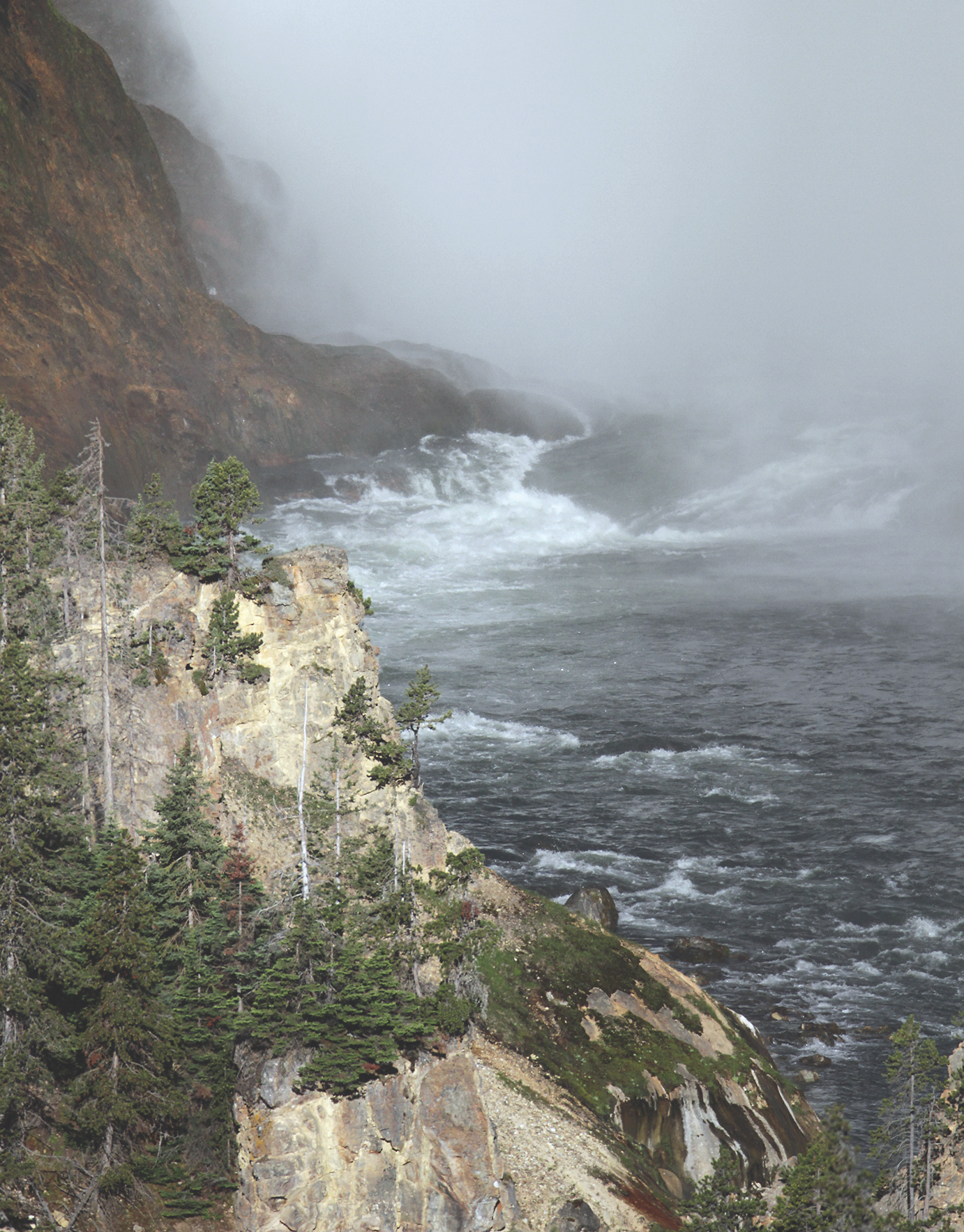 The People of Yellowstone

The human history of the area dates back thousands of years, and during the past couple of centuries dozens of tribes have spent time in Yellowstone. One of the most documented events is the 1877 flight of the Nez Perce, who spent weeks traversing the park, taking captive some Montana tourists (whom they eventually released). They traveled through Pelican Valley, over Mist Creek Pass and along the Lamar River as they outpaced the U.S. Army led by Gen. Oliver O. Howard who pursued them from western Idaho across Montana, Yellowstone and back into Montana where they were eventually surrounded by different troops, and most were forced to surrender. Nez Perce Creek is named for these travelers, and you’ll find an interpretive area midway between Old Faithful and Madison Junction where the creek crosses through the park.

I spent my backcountry trip in Yellowstone reading the great mountain man book Give Your Heart to the Hawks by Win Blevins, but an equally great place to sit and read is on the outdoor veranda, or second-floor seating areas in the great lobby of Old Faithful Inn. This massive structure is an iconic national park lodge that was seriously threatened by wildfires in the park in 1988 (and saved in part due to installation of irrigation sprinklers).

Learn more of the history of the park, and see art and artifacts related to the Hayden Expedition at the park visitor center in Mammoth, where you can stay in the Mammoth Hotel, hang your hat in a small cabin, or even find a campsite nearby.

The summer of 2021, my most recent trip to Yellowstone, was a journey with granddaughters. The COVID-19 pandemic was still posing challenges to travelers, but it was one of the best vacations. We visited Old Faithful and the overlook to see the Grand Canyon of the Yellowstone and the falls. We avoided the massive crowds in Norris Geyser Basin (cars were lined up for more than a mile outside the official parking areas) and instead walked the trail at Fountain Paint Pots and ended up in a buffalo traffic jam in the Hayden Valley.

We had a picnic off one of the one-way roads between Norris and Canyon where we shared a table with other travelers, saw families sitting on blankets they had thrown on the ground and watched an older couple play cards in the dappled sunlight of the pine forest. That is the kind of experience to have in Yellowstone.

To celebrate the sesquicentennial of Yellowstone National Park, the indigenous tribes who have connection to this land are developing programs and exhibits. The Wind River Inter-Tribal Gathering, June 1-3, will be an opportunity for tribal nations and others to discuss conservation and the history of the tribes in the region while celebrating the importance of the area to American Indians. This event is being organized by the Shoshone and Arapaho tribes, but all Native nations and others are invited to take part.

The “Conversations on Collecting Yellowstone” conference takes place in Bozeman on June 5-8 and includes speakers on a range of topics from the historic lodges of the park to details about the 1871 Hayden Expedition.

The least visited area of Yellowstone is the Tower-Roosevelt area, which is midway between Mammoth and Tower on the park’s figure-eight road system. Roosevelt has cabin accommodations and a main dining room and offers horseback and wagon rides that often include meals served under the vast expanse of sky. In this region, see the basalt columns that reflect the volcanic eruptions that formed Yellowstone, view petrified wood or hike on trails that are not over-traveled. Truly, Roosevelt is a place to enjoy some of the solitude of Yellowstone.

Old Faithful Inn and Snow Lodge are both suitable for families; and there are faster food options at Old Faithful Village as well. At Mammoth, a more upscale meal is available at the Mammoth Hotel, but the Mammoth Terrace Grill will get you in and out quickly. A quick meal is also the ticket at Canyon Lodge Eatery and Grant Village Dining Room. Without a doubt, the most serene dining experience in Yellowstone is at the Lake Yellowstone Hotel, which caters to an older clientele with fewer children. All of those facilities also have a variety of lodging options from a cabin or hotel room to more luxurious accommodations, including the suite at Lake Yellowstone that has often been used by U.S. Presidents when they visit the park. Bridge Bay Campground is the park’s largest, but there are other smaller campgrounds throughout the park. Permits are required for backcountry camping.

Good Lodging near the park:

Note: Due to COVID-19, not all facilities are fully operational.