Buckskin Frank Leslie – A Good Man with a Gun 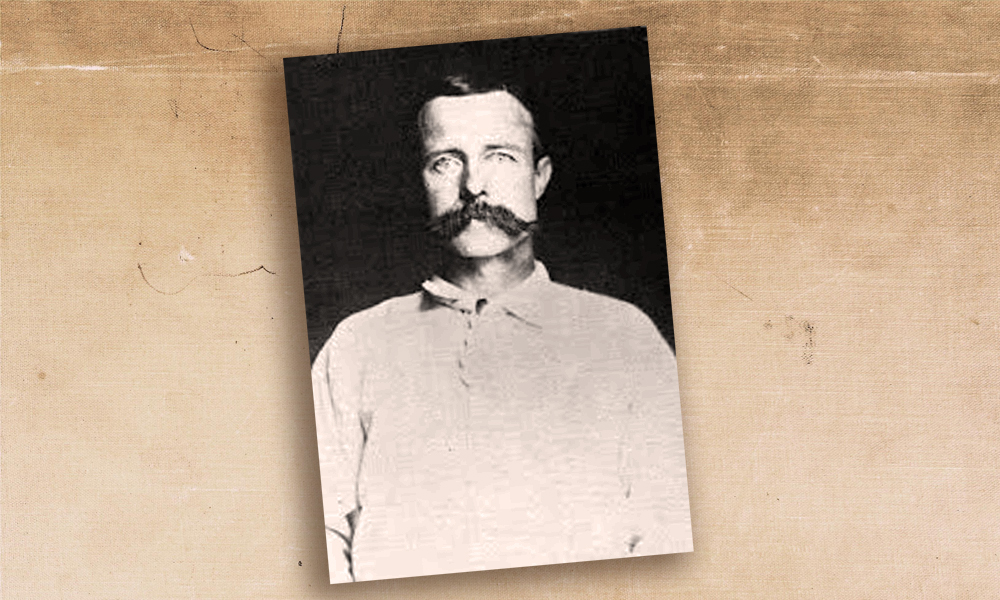 Nashville “Buckskin” Frank Leslie joined the pariahs of Tombstone’s raucous society around 1880. Although he was only 5’ 7” and weighed 135 pounds Frank acquired a reputation as a good man with a gun. His nickname came from the buckskinned-fringed jacket he always wore.

Frank’s early years were spent as an Indian scout for the Army in Oklahoma, Texas and Dakota during the 1870s. Nobody knows for certain where he came from because he listed several places.

Handsome, dashing Buckskin Frank was also quite a ladies man and that would eventually be his undoing. During the summer of 1880 he took a liking to a beautiful dark-haired lady named Mae Killeen. Although she was separated from her husband Mike, he was keeping a jealous eye on her saying he would shoot any man he caught her hanging around.

On June 22nd, 1880 Mae was sitting on the porch of the Cosmopolitan Hotel with Frank when Mike made the mistake of confronting the hot-tempered gunman. When the gunsmoke cleared Killeen was dead on the ground. A week later Frank married the “grief-stricken” widow.

Since the real Billy the Kid had been gunned down in New Mexico on July 14, 1881 by Sheriff Pat Garrett, Claiborne began insisting folks now call him Billy the Kid. His self-styled “reputation” didn’t hold up after he’d run away from the “Gunfight near the O.K. Corral” a few months later and left three friends to die.

One version has it that they argued after Frank refused to call him Billy the Kid and another says he accused Frank of killing his friend Johnny Ringo. When Johnny Ringo was found dead at Turkey Creek in July, 1882 many suspected Frank had done the deed.

Claiborne kept pressing the matter, confronting Frank in the Oriental Saloon. On the evening of November 14th, 1882 Frank tossed him out but Billy returned later telling anyone who’d listen he was gunning for Leslie. Buckskin Frank accommodated him and gunshots were exchanged. Billy missed and Frank didn’t. Supposedly Billy’s last words accused Frank of killing Ringo.

Frank and the widow Mae split the blanket in 1887. Mae accused him of having an affair with a good-time girl named Birdie Woods. Another reason was she tired of him making her stand against a wall while he traced her silhouette with bullets from his six-shooter.

Next, he took up with a pretty blonde named Mollie Williams (or Sawyer, or Bradshaw, or just plain Blonde Mollie). She was working as a singer and prostitute at the Bird Cage Theater. He may have killed her “benefactor,” a man named Bradshaw to get him out of the way.

Frank owned a ranch in the Swisshelm Mountains 19 miles east of Tombstone and after his divorce from Mae in 1887 Mollie moved in with him. What Frank and Mollie had most in common was their love of whiskey which created a stormy relationship. Frank’s temper often got the best of him when he was drunk and he accused Mollie of having an affair with a ranch hand who called himself “Six-Shooter Jim Neil”.

On July 10th, 1889, during a drunken fit of jealousy Frank shot and killed her. Neil witnessed the shooting so Frank shot him too. His wound wasn’t fatal however and he was able to make his way to Tombstone where he was treated by the famous gunshot physician, Dr. George Goodfellow. Then he reported the incident to authorities.

Meanwhile Frank rode into Tombstone and reported that he had shot and killed Neil after seeing him murder poor Mollie. However, the law had finally caught up with Frank. He was tried and found guilty of murder and sentenced to 25 years in the Yuma Territorial Prison.

Frank was pardoned and released in November of 1896 thanks in part to a wealthy widow named Belle Stowell who’d fallen in love with the famous gunfighter while he was behind bars and began corresponding with him. They became husband and wife less than a month later. They soon parted company and he married an Elnora Cast. History doesn’t record whether or not he ever bothered with divorcing any of her predecessors.

He seems to have disappeared around 1922 and his death is still disputed. One source says he committed suicide in 1925 while another says he struck it rich in the Klondike and died that way in the San Joaquin Valley.

The best information indicates his last years, drunk and penniless, were spent working as a swamper in a San Francisco pool, dying in 1930 at the age of about eighty.