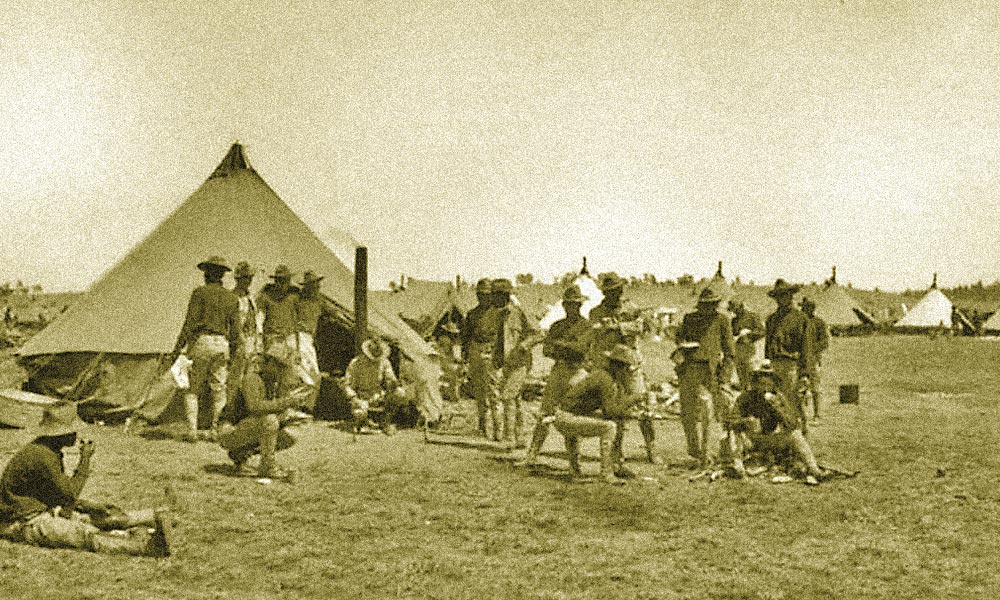 Buffalo soldiers, officially organized in 1866, were an important part of settling the West. They served in various all-black regiments. Benjamin Grierson was the first commander of the 10th Cavalry. From 1866 to 1890, he led his troops to forts in Kansas, New Mexico Territory, Indian Territory, Texas and Arizona Territory.

Just because the soldiers had a unique name did not mean they ate different food than other U.S. military troops. While on the move, Buffalo Soldiers ate rations that usually included beans, bacon, coffee and hardtack—a cracker made from flour, water and salt. They also hunted and fished as they traversed the West.

Artist Frederic Remington had the honor of riding with the 10th Cavalry in Arizona. In April 1889, The Century published his experience: “I had no reputation as a hard rider to sustain, and, moreover, had not backed a horse for the year past. I knew too that Uncle Sam’s beans, black coffee, and the bacon which every old soldier will tell you about would fall to the lot of any one who scouted with the 10th Dragoons.”

Brigadier Gen. George A. Forsyth described Army frontier fare in his book, The Story of the Soldier: “[The evening meal] is not an elaborate one, the bill of fare being the same as for breakfast—namely, coffee, bacon, and hard bread…. Potatoes and onions, if obtainable, were taken; but, although used most sparingly, they did not last long. A stoppage of a day or so permitted bean soup, beans, dried apples or peaches, biscuits, and fresh bread to grace the board.”

Food was also available from military gardens. Forsyth wrote, “These [gardens] are generally under the supervision of the post adjutant or the regimental commissary. They are located at some accessible point near the post, and each company commander details one man as company gardener, who is relieved from post guard duty while acting in that capacity. From the post fund seeds of all kinds that will mature in that locality are purchased, and in due season peas, beans, lettuce, tomatoes, onions, beets, cucumbers, cabbages, radishes, and melons are produced in abundance.”

Grierson and his 10th were stationed in Santa Fe, New Mexico, while chasing the Apache Kid in 1887. Their Chief Commissary Capt. John J. Clague reported the troops consumed onions, potatoes and beef. He also stated, “The general supply of Subsistence Stores for all posts in the District with the exception of flour from Colorado, and a few canned goods from California, is shipped from eastern depots…. Ham and breakfast bacon on account of drying out have frequently to be issued to the troops, which leaves the post for a considerable portion of each year without these articles.”

Army cooks were provided books that included recipes for both forts and on the field. While on the move, Buffalo Soldiers may have eaten Stewed Potatoes, a field recipe that uses some of the rations the Army issued to cooks.

Peel and cut the potatoes into thick slices. In a deep pot, cover potatoes with water. Add the remaining ingredients and cover pot with lid. Cook over medium heat until potatoes are tender. The liquid should dry up, so stir occasionally to prevent sticking. Remove the bacon and onion. Season potatoes to taste.