Reveille on the Overland Trail 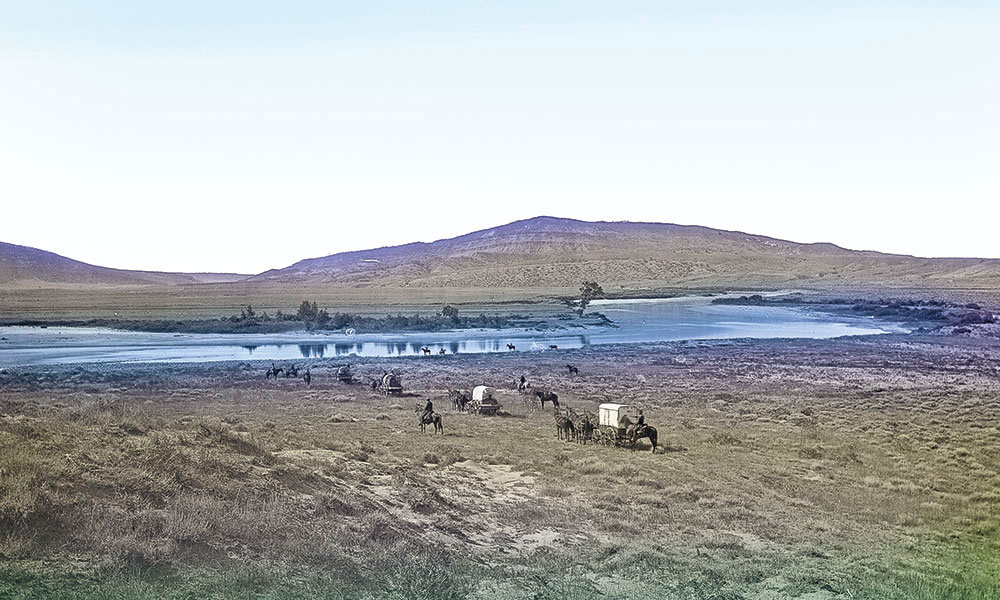 Ohio State Senator William O. Collins, a proponent of war-funding after the attack on Fort Sumter in April 1861, took a stronger stand for the Union by raising a regiment of cavalry in southern Ohio, known as the 7th Ohio Cavalry. Before the full regiment could be organized, it combined with the 6th Ohio Cavalry, and Collins became the commander.

In January 1862, Maj. Gen. Henry W. Halleck ordered the 6th Ohio and Collins to report to Benton Barrack at St. Louis, but just after they arrived they were ordered first to Nebraska City, Nebraska, and then on west to Fort Laramie, where their assignment was to guard the Overland Mail.

In time, the Ohio troops combined with additional companies until, by the spring of 1863, the 6th Ohio became the 11th Ohio. These troops patrolled along the route of overland pioneers and the overland mail at a critical time during the nation’s history.

The Ohio troops spent little time at Fort Kearny, but that is where our trip begins. This post, established in 1847, had buildings made of adobe and wood and included a post office—which was very important to travelers who could send a letter home—as well as a telegraph station, barracks and a large storehouse.

A couple of miles west of Fort Kearny, Dobytown housed a community of business entrepreneurs who sold liquor and goods, and operated establishments for gambling and where soiled doves plied their services.

Like the Ohio troops’, our route continues west (take Interstate 80 or U.S. Highway 30) through Ogallala and then angles northeast along the North Platte River (follow U.S. 26) toward Scotts Bluff. The 11th Ohio garrisoned posts at the Ficklin and Mud Springs stations, and built Camp Shuman (later known as Fort Mitchell) just west of Scotts Bluff. They would continue west to Fort Laramie, a site that started as a fur trade post, but like Fort Kearny, later served as a military fort along the trail that overland travelers
followed to Oregon, California and Utah.

Today’s travelers can visit Scotts Bluff National Monument or Fort Laramie National Historic Site. Both are remarkable for their history and their settings.

While Scotts Bluff is at the edge of a larger metropolitan area, it is easy to walk the
trail taken by the 11th Ohio Cavalry and hundreds of thousands of emigrants as they headed to the West.

Our route continues to Casper, Wyoming, site of the Platte Bridge Station, a log structure built in 1859 at the crossing of the North Platte River. This was a Pony Express Station and became a military station to protect the transcontinental telegraph. It was renamed Fort Caspar, for Lt. Caspar Collins, son of the Ohio commander William O. Collins.

One primary role for the Ohio troops was to keep the road open for travel, another involved maintenance on the telegraph line, also to keep communications flowing between East and West. Sergeant Isaac Pennock was stationed at Platte Bridge Station in 1865 when tension rose all across the region in a year that became known as the “Bloody Year on the Plains.” The stations along the trail suffered nearly constant attacks, and the telegraph line was repeatedly sabotaged, as noted in a diary Sgt. Pennock kept that summer:

May 27—Have news that the Indians attacked Rocky Ridge (St. Mary’s) [near South Pass] today in strong force.
June 3—At 3 p.m. received dispatch from Colonel Plumb that Indians have attacked station at Upper Bridge.
June 28—Fight on Reshaw Creek.

As many as 300 to 500 Lakota warriors led by Red Cloud, Old-Man-Afraid-Of-
His-Horses and Young-Man-Afraid-Of-His-Horses, and Cheyenne warriors following Roman Nose, Dull Knife and White Bull gathered near the Platte River in late July 1865.

Some of the warriors had been harassing troops and cutting wires of the transcontinental telegraph in the region west of Deer Creek for most of the summer. On July 25 some Indians rode toward the post at Platte Bridge. A few soldiers went out from the post to meet the Indians, engaging in a skirmish that had little effect on fighters from either side.

At dawn on July 26, Custard had the wagon train on the move over the telegraph and emigrant road, intending to push the final fifteen miles to the post at Platte Bridge. Shortly after breakfast, troops at Platte Bridge Station saw about 90 Indians on the hill a couple of miles from the post. Maj. Martin Anderson ordered Lt. Caspar Collins,
Sgt. Adolph Hankhammer, Sgt. Isaac Pennock and Cpl. Henry Grimm of the 11th Ohio Volunteer Cavalry to take 25 men, including representatives of Companies
I and K, 11th Kansas Volunteer Cavalry, to leave the station and head toward Custard’s oncoming wagon train.

The relief troops rode over the Platte Bridge behind Collins and were still in sight of the station when Lakota and Cheyenne Indians swooped around them, cutting off any retreat. A short fight, lasting about ten minutes, resulted in the deaths of several soldiers, including Collins.

The events of the day had not ended, however. Not long after the fight in which Collins died, Custard came over the hill with his wagons, apparently unaware of the danger. The Indians attacked the wagons in force and killed all the men with Custard; a couple had managed to escape as the attack began. Platte Bridge Station was cut off from outside help. The soldiers could not repair the telegraph line because of the constant threat of attack by the Indians.

In the aftermath, Platte Bridge Station was renamed Fort Caspar, for Lt. Caspar Collins. The Civilian Conservation Corps rebuilt Fort Caspar at the original site, and it is now a National Historic Place managed by the City of Casper.

Stations along the Sweetwater

From Fort Caspar we head west to Independence Rock and Split Rock. The posts occupied by troops of the 11th Ohio stood here once; now you see only the rock formations, though at Split Rock the
Handcart Ranch has rebuilt an earlier trading site, Seminoe Fort, once used to resupply Mormons and other travelers on the Oregon-California Trail.

Split Rock Station, constructed in 1859 farther west on the trail, near the landmark of the same name, was garrisoned by about 50 soldiers of the 6th Ohio in 1862, when traditionally friendly Shoshone Indians and their Bannock allies attacked stage stations along the Sweetwater River and west to Bear River Valley in present-day Idaho. They cut telegraph lines and captured livestock needed for the stage operations.

“Early in 1862, the 1st Division of the 11th Ohio Volunteer Cavalry with Colonel William Collins in command reached Fort Laramie, and was sent out to guard the stage and emigrant trains. Indians appeared near Sweetwater Station one day, seemingly on the war path. The soldiers left, but the telegraph operator remained at his station. He sent messages to operator John Friend at Split Rock. The Sweetwater operator reported to the Split Rock station that the Indians were dancing a war dance down on the meadow. Later he warned that they were coming toward the station, then they were climbing the stockade, and finally that they were coming into the station. Help was sent, but it came too late. The operator was found scalped and pinned to the ground by a peg through his mouth. The station had been burned.”

Ohio troops served at other stations to the west, including Three Crossings, which was under command of Maj. John O’Ferrall. Lt. Caspar Collins served at Three Crossings in 1863, describing it as “surrounded by a palisade, varying from 12 to 15 feet high, and surmounted by a large lookout and block house that sweeps the surrounding country.”

Our route now turns south to Rawlins. When Maj. John O’Ferrall of Company A, 6th Ohio Cavalry (which in 1863 became the 11th Ohio), traveled in 1862 from Devil’s Gate to near Elk Mountain to establish Fort Halleck, his command stopped in a gap a day’s travel south from Devils Gate, where there was a spring and wood for fires. His men were drinking and, following a search of the wagons, O’Ferrall found a barrel of whiskey in one wagon, which he destroyed. When the contents flowed into the spring, historian C.C. Coutant reported, the soldiers rushed “forward with cups, canteens and camp kettles to save what they could of the whiskey.” This gave the gap its name Whiskey Gap.

O’Ferrall and his command rode south and east, ultimately establishing Fort Halleck at a site on the Overland Trail just north of Elk Mountain. These troops, who became the 11th Ohio Cavalry while at Fort Halleck, would then push west, establishing posts along the trail to Fort Bridger.

Sage Creek Station, south of Rawlins (actually located on Miller Creek, despite the station name), was a log building approximately 25 by 60 feet with an adobe fireplace and dirt-and-pole roof. One attack took place on June 8, 1865. One soldier at the site reported: “The detachment at Sage Creek station was attacked by about 100 Indians. After one hour’s severe fighting they were compelled to evacuate in consequence of a deficiency in ammunition…. The moment they left the station they were completely surrounded. There ensued a desperate fight; the detachment retreated toward Pine Grove Station. The Indians followed for eight miles, killing George Bodine and Perry Stewart, wounding and capturing Orland Ducket, wounding Corp. W. H. Caldwell and Pvt. William Wilson, all of Company K, 11th Ohio Volunteer Cavalry.… [T]hey are doing all they can to keep open the road, but the force is inadequate to cope with the number of Indians.”

Along the Overland Trail from Elk Mountain to Fort Bridger are remnants of some of these stations where the 11th Ohio stood duty. More clearly seen is the trail itself, once used by overland travelers, soldiers and Indian raiders.

Although some sections of the trail are on private land and therefore inaccessible today, much of the route from Rawlins west to Rock Springs and Green River is on public land. The only fully preserved post is at Point of Rocks, just south of Interstate 80.

Our route ends at Fort Bridger, the important trading site that mountain men Jim Bridger and Louis Vasquez established in 1842. Here, like the 19th-century travelers, you’ll find Bridger’s Post stocked with trade goods, and you can visit the military buildings as well as the museum.