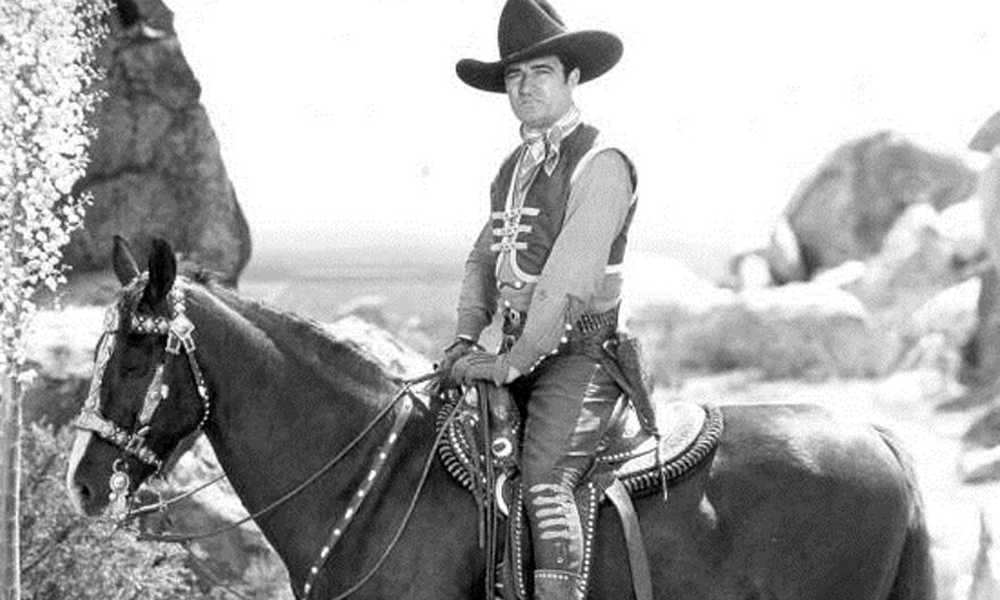 The movie fans of the 1920’s wanted flamboyance to personify the age that became “The Roaring Twenties.” It was the age of superstars: that included Babe Ruth, Red Grange, Gertrude Erdele and Charles Lindbergh. America needed a super cowboy hero to compliment the period as the nation was returning to “Normalcy.” Post WW I audiences wanted to forget international troubles and escape into the world of fantasy.

Mix, an expert horseman, brought rodeo-costume flamboyance and Wild West Show acrobatics to his movies which were pure frolic and delight. He was the man in the white hat who rode into town and battled the bad guys. They were loaded with fist fights, slapstick stunts, pretty ladies and to the delight of his adolescent audience, he never rode off into the sunset with any of them. He saved that for when he was off camera.

Tony, the “Wonder Horse” leaped steep canyons, swam raging rivers, galloped through fire and walked over to a table, picked up Mix’s six shooter and brought it to him. Tony even got to star in his own movie. Tony, like his master, flirted with the ladies. Tony’s preference though were fillies and mares.

Mix lived a lavish lifestyle as was expected of a wealthy superstar. He was also spending it as fast as he was making it. Two of his major indulgences were booze and women. Over a span of several years he married five times. An overeager agent embellished his biography saying Mix was born in Texas, was a former Texas Ranger; he fought in the Boxer Rebellion in China, the Boer War in Africa and the Spanish American War. But wait, there’s more. He was also a U.S. Marshal, sheriff in Kansas and he rode with Pancho Villa in Mexico.  Actually, he did none of them. He’d stand around wearing a big grin while his agent did all the talking. That being said, Mix could also spin a tall tail or two.

Mix was born Thomas Hezikiah Mix in Mix Run, Pennsylvania. His father was a stable master where learned to ride at an early age. He had boyhood dreams of someday joining a circus or Wild West show. It’s said his parents caught him honing his skills as a knife thrower by standing his sister against a barn wall using her as his “assistant.”

He joined the Army in 1898 but took a permanent furlough in 1902 to get married. Over the next few years he acquired a couple more wives. In 1905 he rode with a group of horsemen in Teddy Roosevelt’s Inauguration Parade, something that led to a myth that he had been one of Roosevelt’s storied Rough Riders.

A superb athlete, he won two national roping championships in 1909 and 1910. He might have been flamboyant but Mix was truly a cowboy’s cowboy.

Mix made 291 full-length movies during his time in Hollywood. Legend has it his movie career ended in 1927 because his voice didn’t play well in the talkies. Truth is, Mix was born in 1880 and Father Time was catching up with him. Mix was almost fifty when the first talkie came out. He retired from making movies in the mid-1930s. Before leaving Hollywood he befriended a young man who’d been injured playing football for the University of Southern California and need a job. Mix found a job for him working at Fox Studios. The youngster wound up appearing in films as “Singing Sandy” but became better-known as John Wayne.

In his later years Mix owned a traveling circus.

His long-running radio show, The Tom Mix Ralston Straight Shooters, ran from 1933 until into the 1950s but he never appeared on the broadcasts.

Heading from Tucson to Phoenix, he crashed his 1937 yellow Cord Phaeton convertible in a dry wash near Florence, Arizona on October 12th, 1940.  He died when the heavy aluminum suitcase lurched forward striking him in the back of the neck, killing him almost instantly.

Two years to the day of his death, October 12th, 1942, Tony died at the age of 40. His death was less dramatic, the Wonder Horse died peacefully of old age.