The First of the Silver Screen Cowboys 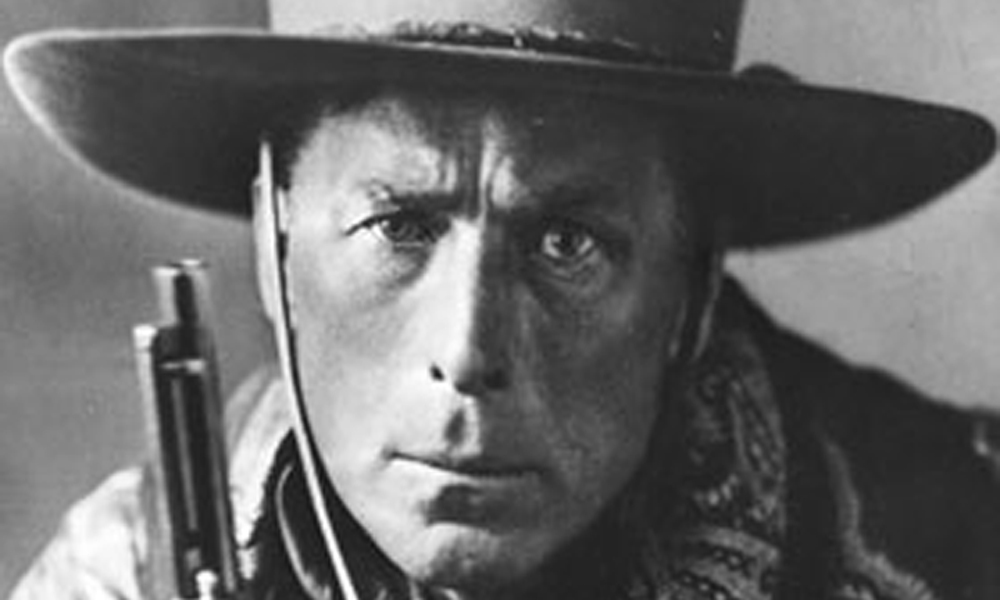 Edwin S. Porter’s, The Great Train Robbery hit the silver screen in 1903. Filmed in the wilds of New Jersey, it lasted just nine minutes. It was the first motion picture with a story-plot and cost only $150 to make.

When a bandit fired his pistol directly into the camera. The unsophisticated audience, unaccustomed to such realism, panicked. Women screamed and fainted while men dove for cover under the seats. It marked the birth of the genre of the western.

An actor named Max Aronson had a bit role in the film. In one scene he unceremoniously fell off his horse, an unbecoming beginning for America’s first cowboy movie star, especially after telling the director he could ride like a Comanche.

He saw the missing ingredient— movies needed a star. Up to then the tight-fisted studios, knowing a leading man would demand more money had avoided turning anyone into a “star.” So in 1907, Aronson and a friend established the Essanay Company. His first films were short comedies but remembering the success of The Great Train Robbery, he soon turned to westerns. Modeling them after the popular dime novels.

Aronson changed his name to Broncho Billy Anderson and would go on to become the first cowboy movie star.

In 1909 he produced and starred Broncho Billy and the Baby.

Over the next few years he proceeded to crank out a series of 300 Broncho Billy movies. He wasn’t dashing or handsome and didn’t look much like a cowboy but the public liked him. He created an audience demand for a leading man. He also became the first person to receive screen credit of any kind.  He gets the credit for instigating both the star system and the “B” movie.

Broncho Billy quit making westerns in 1915 spent more time writing. In the early 1920s he planned to make a comeback but by then a new, more dashing breed of silver screen cowboys had become popular.

The next star of the silver screen was a former Shakespearian actor named William S. Hart. Born in 1864, he was 49 when he made his first film in 1914. He was the first to attempt to portray the “good” bad man of the West. Hart was usually a reformed bad man.  He had a high moral theme with relative realism. His films were also known for their authentic props and costumes. The Old West was still a recent memory and he became friends with Wyatt Earp and Bat Masterson.

In 1915 and 1916 he was the biggest money-making star in the United States. In 1917 he accepted a lucrative offer from Adoph Zukor to join Jesse Lasky’s company which became Paramount Pictures. He made a few popular films and in 1921 was married to a young actress named Winifred Westover. A year later a son, William S. Hart Jr. was born but the marriage ended in 1927.

By the early 1920s Hart’s career was on the wane. The public had grown tired of his moralistic themes and had become enamored with the younger, flashier, fast-action cowboys wearing flamboyant costumes.

Paramount dropped him and in 1925 Hart produced his own western, Tumbleweeds. The film, about the 1893 Cherokee Strip land rush in Oklahoma. It was a success however, Hart had a run-in with United Artists because he felt they hadn’t promoted it properly. This was followed by a long lawsuit that was finally settled in Hart’s favor in 1940. He died June 23rd, 1946 at the age of eighty-one.

A story is told that in his later years Hart was critical of what he considered the movies having little regard for authenticity. When John Ford’s Stagecoach hit the theaters in 1939 Hart pondered the length of time spent on the pursuit of the stagecoach by the Apache warriors. He pointed out that had this been the real West the Apache would have killed the lead horses and that would have been the end of the chase.

To which Ford, who’s maxim was the reason for making a film was to “tell a damn good story.” Ford also understood the fact that movies were more about entertainment than reality, quipped, yes and that would have been the end of the movie.