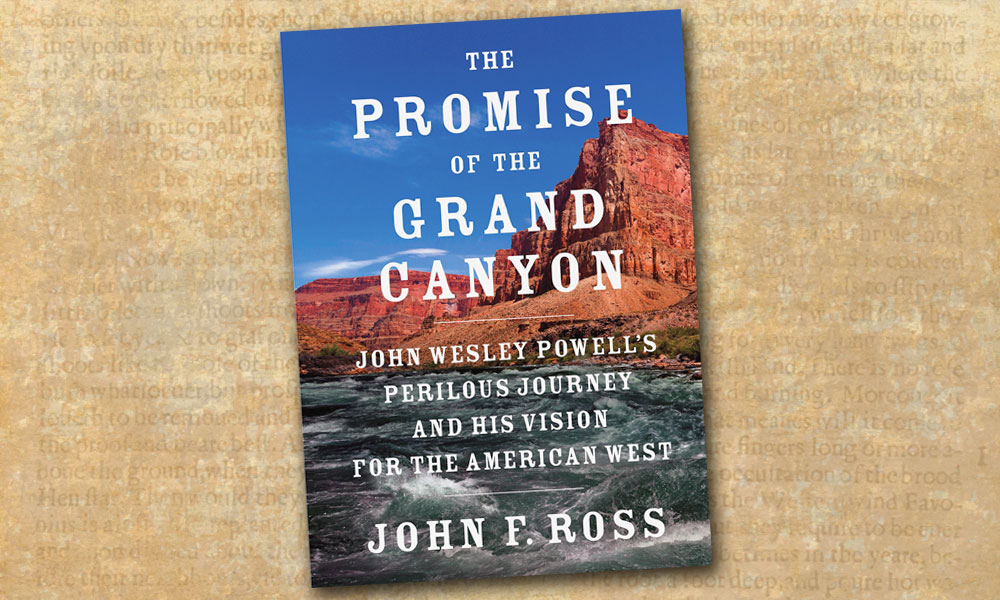 Geologists, conservationists, and environmentalists have been anticipating the 150th anniversary of John Wesley Powell’s extraordinary first expedition down the Green and Colorado rivers in 1869 as the perfect opportunity to debate the climactic sustainability of the American West. The former editor of American Heritage magazine, John F.
Ross, has written a dynamic biography-environmental history, The Promise of the Grand Canyon: John Wesley Powell’s Perilous Journey and His Vision for the American West (Viking, $30), that will definitely find itself in the middle of the dialogue and debate. “This is the story of the most practical of American visionaries….” writes Ross, “…[who] would launch a new vision for America, a bold challenge to the status quo.”

Following Dan Lago’s The Powell Expedition (University of Nevada Press, 2017) and River Master by Cecil Kuhne (Countryman Press, 2017) Ross’s is the third re-examination
of Powell’s life, military service and scientific work published to date during the first expedition’s sesquicentennial cycle. Ross’s The Promise of the Grand Canyon is the most comprehensive chronicle of Powell’s life and career since Donald Worster’s A River Running West: The Life of John Wesley Powell and Wallace E. Stegner’s 1954 classic, Beyond the Hundredth Meridian: John Wesley Powell and the Second Opening of the West. And just as others who have journeyed down the research path of one of America’s greatest explorers and conservationists, Ross cannot resist the opportunity to add his opinion to the debate on Powell’s legacy and its relevance to the very present national and international climate-change debate. Ross writes in his introduction: “This one-armed scientist-explorer threw down a gauntlet that remains essential and important for the time we live in. Not only for the drought and water shortage now afflicting the West, but for the larger world of climate change. While cautionary, it also offers a clear way forward.”

Ross, a highly regarded and award-winning author, is also an adventurer who has led or participated in expeditions from Greenland to the Galapagos. His skills as a researcher and historian, as well as his personal passion for conservation and environmentalism, are combined in a life-pursuing adventure in every climate and continent. His firsthand knowledge of the Grand Canyon and Colorado River, including running its length by dory, as well as his active outdoor pursuits across the West, allow him the perspective to both summarize and share his opinions on the prophetic nature of Powell’s conclusions on Western land use, water reclamation and the absolutism of aridity. “This battler and risk taker, this scientist and visionary, ultimately asked Americans to temper their desires with a practical understanding of what the land and its climate was capable of…” Ross says. “[Powell] did not ask for reverence for the land, but rather—more significantly—he asked for humility when regarding it. It was not then, and not today, an easy message for Americans to hear.”