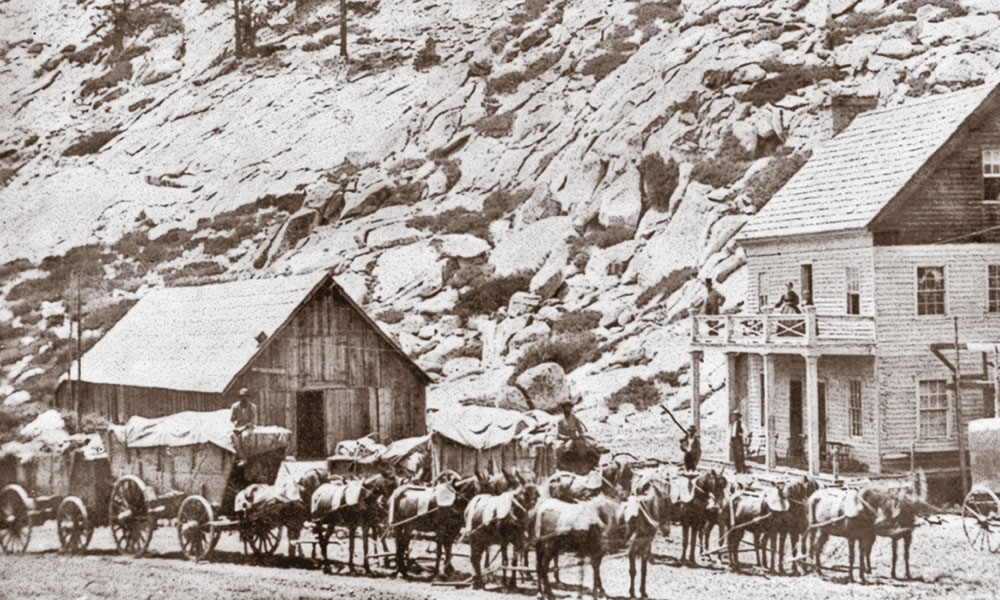 By the 1850s, gold rush fever inspired more and more pioneers to board concord coaches and make their way West. The stagecoach held nine comfortably, but many more often crowded themselves on rooftop benches that jostled and swayed over rough terrain.

The only breaks the travelers received were at “swing” or “home” stations along the cross-country routes, which included the famous Butterfield Overland. Swing stations offered nothing more than a building with a stock tender to assist with horse changes, while home stations were private homes where owners served meals. The stations typically sat about 25 to 50 miles apart along the routes.

Midway between Atchison, Kansas, and Denver, Colorado, sat the home of the Trout family. Daniel Trout and his sisters were known for their hospitality and delicious food. Lizzie’s cooking was so good that she was hired by W.S. McIlvain to assist his wife with the cooking at their stop in Latham.

Meals were not included in the ticket cost and ran between 50 and 75 cents.  Some frugal passengers decided to fill their pockets and “grub” their journey to save money. Imagine riding next to a fellow passenger carrying bologna, dried herring, dried beef and cheese and crackers for a six-day journey.

The food served at most of these stops included bacon, ham and buffalo, elk and antelope steaks. Some had eggs, chicken, roasted turkey, cream for coffee, fresh butter and plenty of fresh vegetables.

Travelers were sometimes appalled at the conditions of the stage stations. Victorians traveling from the East were often shocked at the laissez-faire attitude toward cleanliness.

One man sat down to eat at a station on the dusty plains and griped about the dirt. The landlord overheard him and told the traveler that he was taught that everyone should eat a peck of dirt. The passenger replied, “I am aware of that fact, my dear sir, but I don’t like to eat mine all at once.”

Even the drivers could be turned off from eating at some of the stations and claimed a weak stomach. One man often watched Mrs. X make her biscuits, which were known on the Overland line as the best. He also knew, however, that Mrs. X would pet her cats and dogs, and then immediately plunge her hands into her biscuit dough.

Passengers and drivers alike enjoyed dessert, but not the same one at every station. The drivers especially grew weary of dried apple pie. Dried apples were a pantry staple, and pies were a cheap dessert. It became so bad that a song about the dreaded dried apple pie was created; it began, “I loathe! Abhor! Detest! Despise! Abominate dried apples pies….”

Make these soda biscuits, but try not to pet the animals first.

Combine the flour, soda and salt in a large bowl. Cut in the butter to form
pea-sized pieces. Add the buttermilk and stir; do not overbeat. Gently knead mixture one or two times on a heavily floured surface. Roll out to half-inch thickness. Place in a greased skillet or baking pan. Bake at 450°F for 10–15 minutes or until golden.