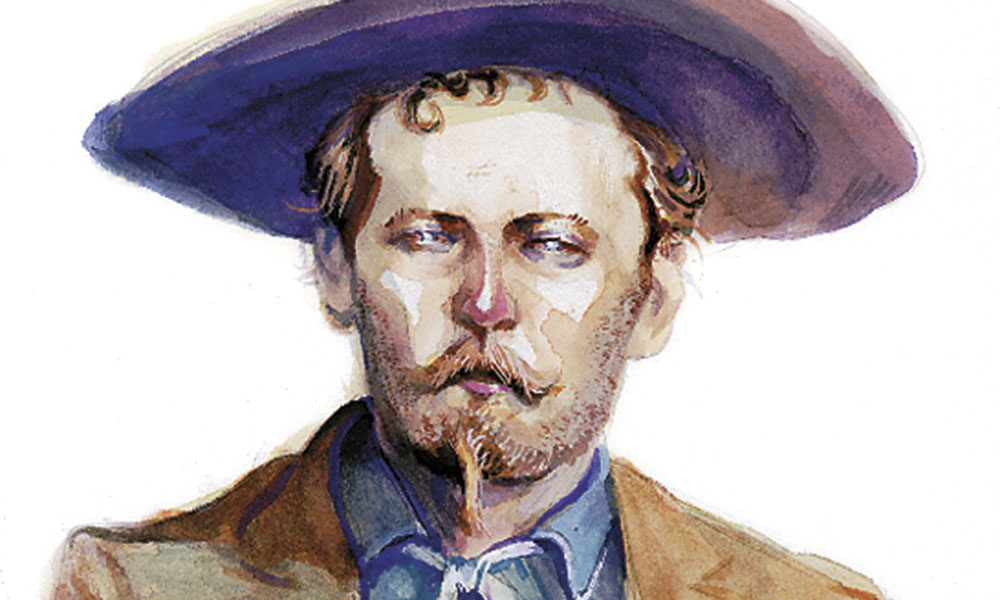 Apache County Stock Association detective J.V. Brighton, formerly known as “Rawhide Jack” during his rustling days, and two lawmen have been on the trail of Ike Clanton, his brother Phin and their rustler band for the better part of two weeks. After a ride from Springerville, Arizona Territory, to Solomonville and environs, the lawmen have gone back into the mountains for another pass at the Clanton Gang.

Arriving at Jim Wilson’s ranch along Eagle Creek last night, the lawmen join Wilson for breakfast in the morning. While eating, Clanton rides straight up to the door. Recognizing his prey, Detective Brighton gets up from the table, while Wilson walks to the door and exchanges greetings with Clanton.

When Deputy Albert Miller steps to the door, Clanton recognizes the lawman and wheels his horse, spurring him toward the thick cover growing close to Wilson’s home. At the same time, Clanton pulls his Winchester from its scabbard.

Brighton and Miller order Clanton to halt. Instead of doing so, Clanton, about 20 yards distant where the trail takes a turn to the left, throws his rifle over his left arm and attempts to fire.

Detective Brighton fires. The ball enters under Clanton’s left arm and passes directly through his heart and out under his right arm.

As Clanton reels in his saddle, Brighton’s second shot passes through the cantle and grazes Clanton’s right leg. Clanton falls on the right side of his horse, as his rifle slips to the left.

Brighton and Miller warily approach the spot where Clanton lays. When they get close, they realize he is dead.

Wilson notifies the nearest neighbors of the tragedy. Four men arrive and identify the deceased. They then give Clanton as decent a burial as circumstances allow.

Phin Clanton was behind bars when his brother Ike was killed. Arrested in April and charged with grand larceny, Phin began his 10-year sentence at Yuma Territorial Prison on October 7, 1887. The prison’s assistant superintendent was none other than Johnny Behan, who, as Cochise County sheriff and while riding with a posse that included Phin and John Ringo, had tried to serve a warrant on Wyatt Earp’s posse during the 1882 “Earp Vendetta Ride.”

Phin was pardoned by Gov. Meyer Zulick on March 15, 1889. A witness recanted his testimony and claimed he, A.G. Powell and J.V. Brighton had conspired to convict Phin and split the $250 reward from the Apache County Stock Association. Behan set Phin free on March 24.

Phin moved to Globe and raised goats. With the exception of a charge of robbing and beating up a “Chinaman,” which he beat, Phin lived out his life in relative peace, dying on January 6, 1906.

J.V. Brighton may have also been the triggerman who killed another Clanton Gang rustler, Lee Renfro, on July 8, 1887. The lawman was not identified, but Brighton was in the area and had been looking for Renfro and other rustlers. Brighton moved on to California where he continued his detective work. He died at the Veteran’s Hospital in Los Angeles in 1928.

Recommended: The Clantons of Tombstone by Ben Traywick, published by Red Marie’s Bookstore; “A Killer is What They Needed:” The True, Untold Story of Commodore Perry Owens by David Grasse, published by Graphic Publishers.