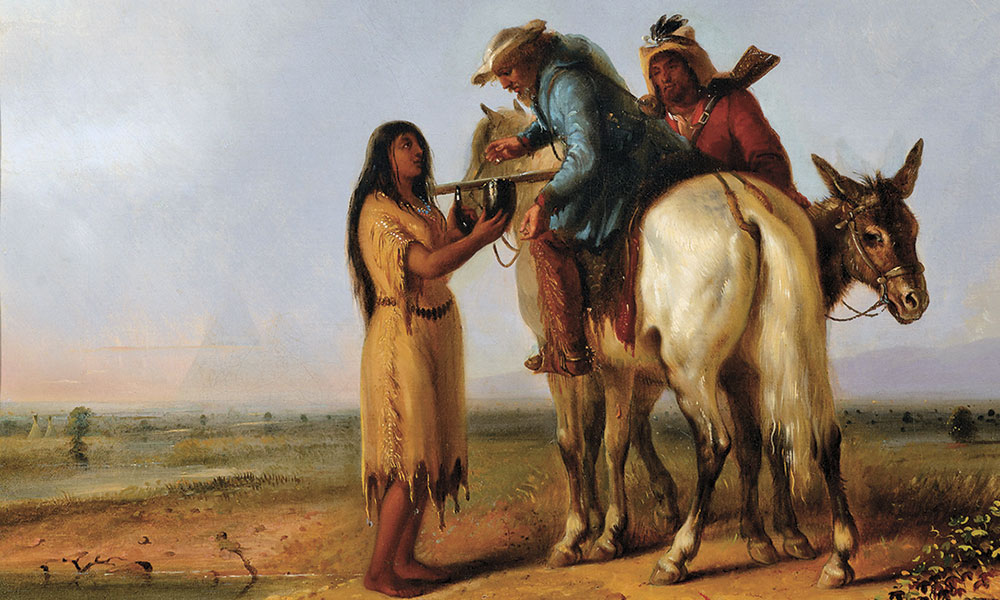 When the hammer fell at $1.5 million on July 28, Coeur d’Alene Art Auction tied with Sotheby’s New York on the highest auction price paid for an Alfred Jacob Miller artwork.

Labeled as The Thirsty Trapper, the oil was originally known as “Indian girl giving drink to a trapper” when Smith Thompson Van Buren paid $65 (equivalent to $2,130 today) for it on December 16, 1852, during the sale of the American Art-Union’s assets.

Smith was the youngest son of Martin Van Buren, the eighth U.S. President, and his life was in upheaval. After the family moved into his father’s Lindenwald home in the spring of 1849, Smith’s wife, Ellen, died that October. He continued to make his father’s home his own, adding to his art collection The Thirsty Trapper and other paintings from the 1852 sale, but wouldn’t find a wife and a mother for Ellen and Edward until he married the niece of author Washington Irving, Henrietta, in 1855.

“One of the greatest privations to be combated on the prairies is the want of water,” Miller wrote about The Thirsty Trapper. The artist knew this firsthand, having traveled as illustrator with Sir William Drummond Stewart to the 1837 Rocky Mountains rendezvous. The oil recalls his circa 1837 sketch of Stewart receiving a drink in a buffalo horn cup from an Indian maiden, owned by the Amon Carter Museum of American Art in Fort Worth, Texas.

Miller mainly lived in his hometown of Baltimore, Maryland. Although he, the oldest son of a tavern keeper, did study art in Europe, Baltimore was a natural place for artists, as the nation’s fourth-largest city attracted patrons and collectors.

Yet had his father not died in 1836, leaving the family in debt, and had the Panic of 1837 not added to the economic turbulence, he might not have left in September 1837 to seek his fortune in New Orleans, Louisiana.

Miller’s chance meeting with the Scottish nobleman took him along the route later known as the Oregon Trail and, for Miller, a road to riches. He had reached New Orleans with $30 in his pocket and left with nearly 200 sketches of the frontier West and memories of fur trappers that would provide an unlimited supply of material for his art.

As his artist auction record demonstrates, Miller is still best remembered for his frontier West portrayals.