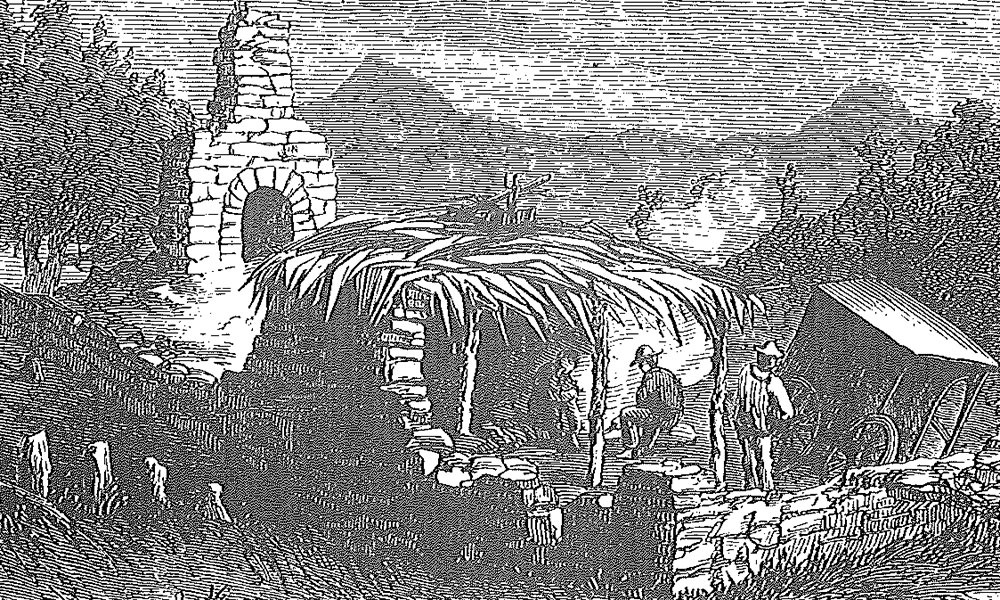 In 1861, the U. S. Army was withdrawn from Arizona to fight in the Civil War that raged in the East.  The military forts and supplies were burned leaving the Arizonans to fend for themselves. To compound the problem a foolish decision by a young Army lieutenant named George Bascom at Apache Pass resulted in the killing of men on both sides igniting a ten-year war with the great chief Cochise that eventually cost thousands of lives on both sides.

The Apache and the lawless dregs of frontier society seized the opportunity to ravage the settlers.  Travelers were murdered daily on the roads leading out of Tucson as many citizens fled to California or Sonora. The bloody road heading south from the Old Pueblo was christened, “Tucson, Tubac, Tumacacori, to Hell.”

One of those brave men who refused to run was a Tennessean named Bill Rhodes. His one-man stand against a large force of Apache warriors in 1861 is now a classic tale from Arizona’s dark and bloody pioneer days.

Rhodes arrived in Arizona from California in 1855 and three years later was a prospector during the first gold rush along the Gila River.

By 1861 he had a cattle ranch about eighteen miles north of Tubac on the Santa Cruz River. He set out one day with a Mexican companion to gather some loose horses. About four miles north of his ranch they stopped at the fortified inn at Canoa where two men were cooking supper. After a short visit they rode on to gather the horses. They rounded up the herd and drove them back to the inn and were greeted by a horrible scene. They’d only been gone for an hour but in that time a large band of Apache had attacked, killing and mutilating the two men before retreating into the brasada nearby.

The two decided to ride on to Tubac but had gotten a short distance down the road when they were attacked by more than a hundred mounted warriors. More were afoot. An arrow pierced Rhodes arm as he and his friend spurred their mounts towards Tubac with the Apache in hot pursuit. They were about a mile from the inn at Reventon when Rhodes horse became jaded. He turned and headed towards the river looking for a place to make a stand. The warriors closed in to about two hundred yards and were getting ready to make their kill.

Rhodes jumped from his horse and crawled into the dense brasada near a mud hole. He spread the loads and percussion caps for his revolver in front of him, then snapped the shaft of the arrow and pulled the arrowhead from his arm. To stop the bleeding he packed mud over the wound.

Meanwhile the warriors surrounded his hiding place. The first one to charge was dropped in his tracks. Another, believing his pistol was a single shot, charged and he too went down. Four more charged and met the same fate. Now they were sure his pistol was empty but Rhodes had another loaded cylinder and was ready for them. Two more went down. They continued to pour gunfire and arrows into the thicket but incredibly he wasn’t hit. For three hours he kept them at bay.

Rhodes had two rounds left in his pistol. Another foolishly charged and went down. The rest of the warriors paid heed and retreated out of range.

One of them who apparently knew him, shouted in Spanish, “Don Guillermo! Come on out and join us; you’re a brave man and we’ll make you a chief.”

This wasn’t his first rodeo and Rhodes wasn’t buying. In Spanish he replied, “No, damn you I know what you’ll do to me. I’ll kill the last one of you before you’ll take me.”

The Apaches discussed the situation among themselves and decided it wasn’t a good day to die and rode away at a gallop. Rhodes waited until he was sure they’d left then walked to Reventon.

The war in Apacheria lasted for almost thirty years. It’s stained with the blood of thousands and washed in the heroism and valor of men and women of many races. The story of Bill Rhodes is but one of those.