A Daring Sense of Humor 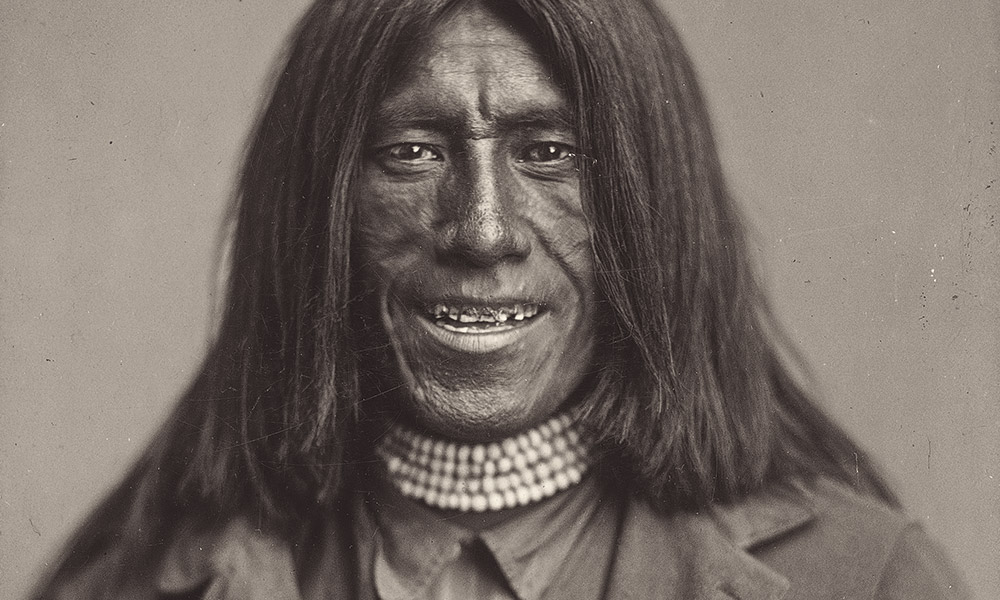 Yuma Bill’s broad smile suggests he engaged his cavalry comrades in more than one game of “grinning through a horse collar.”

Yuma Bill was not Apache, but Tolkapaya Yavapai, then referred to as Yuma Apache, Yavapai Apache or just Apache. Their tribal customs were similar, but their language, very different.

Once Joseph R. Walker and his party discovered gold along Granite Creek in 1863, the new Arizona territorial government established its capital at Prescott in Yavapai country the following year.

The Yavapai were among the first Indians placed on reservations in Arizona Territory. These became a natural recruiting ground for “Apache” scouts to help pacify Apaches in eastern and southern Arizona Territory. Young Yavapais, including Yuma Bill, seeking excitement, respect and money rallied to the flag.

From his long association with troops, Yuma Bill learned a relaxed willingness to share in jokes. His chase of Apache medicine man Geronimo presented a humorous event.

On April 23, 1882, near Stein’s Peak, along the Territorial Arizona-New Mexico border, Yuma Bill was one of the six scouts traveling with Lt. David McDonald and two enlisted men to track Geronimo. The Apache renegade had returned to the San Carlos Reservation to force Chief Loco’s people to follow him into the Sierra Madre Mountains in Mexico.

Cutting the trail, the party encountered two prospectors who took them for hostiles. They trembled and ran in circles before the Yavapai scouts, thinking they were about to be tortured, even though an Army lieutenant stood before them in uniform.

Continuing along the trail, the party came to a rocky ridge in a canyon where smoke showed recently extinguished fires. The six scouts believed it death to go on. McDonald berated them, calling them women, so they continued.

As the men approached a ledge, eyes intent on the ground, only Yuma Bill thought to poke his head above. He yelled, “Watch out, Lt. McDonald!”

The officer, looking into Apache guns, threw himself forward as a volley rang out. Three scouts fell dead.

Yuma Bill and the lieutenant whirled and fled, but a second volley took Yuma Bill’s life. Holding his ground with the remaining men, McDonald sent word to Col. Forsyth.

Galloping hard to the rescue, the colonel, with six troops of cavalry at his back, arrived on the scene and attacked. Suffering another two men killed, Forsyth withdrew his overwhelming force, while the Apaches retreated across the open San Simon Valley.

Chief of Scouts Al Sieber mocked the ineffective colonel. Had he lived, Yuma Bill would have seen him as a joke too.

Doug Hocking grew up on the Jicarilla Apache Reservation in New Mexico and served as an Armored Cavalry officer. He penned the first full-length biography of Tom Jeffords, a Spur finalist in 2018. Writing from the land of Cochise, Hocking continues work on his novels; his latest novel is Devil on the Loose.