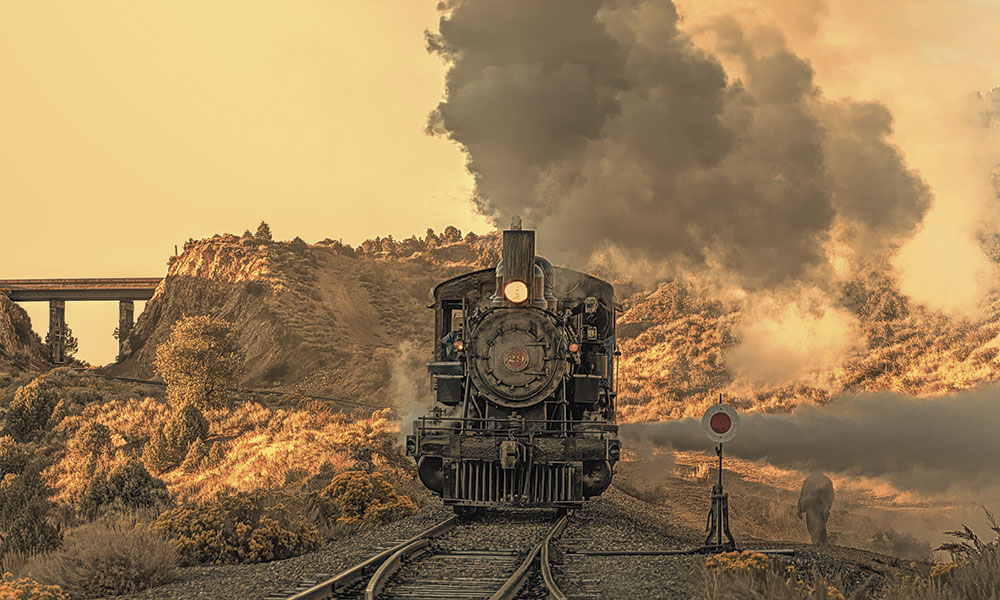 In 1868, America was anticipating the completion of the first transcontinental railroad within the next year. The Central Pacific from Sacramento was hastily building parallel to the California Trail across northern Nevada, while the Union Pacific was tunneling through the Utah Territory’s Wasatch Mountains to reach the final mile of track near Promontory Summit. The two railways would meet May 10, 1869, when the Golden Spike was hammered, connecting a nation, and launching it headlong into the rail era. Not only did the railroads transform travel, industry and agriculture in the Western United States, but the railway companies built towns, grand train stations, hotels, restaurants, stage lines. Eventually, short line and narrow-gauge engineering masterpieces of rail and grit connected the smallest of boomtowns to the world.

Those original transcontinental lines still connect the West to the global marketplace, and Amtrak still carries passengers through fabled Western landscapes. But, while Amtrak plies the longer routes, many historic railways operate seasonally or year-round as regional heritage passenger trains departing from some of the West’s spectacular railroad towns.

At True West, we believe a summer is not complete without a weekend in a historic
rail town to enjoy the finest Western hospitality at unique hotels and restaurants, Main Street shops, local history museums and, of course, adventures aboard heritage rail lines. So pack your bags and camera, reserve your tickets and head West for an adventure of a lifetime.

The Denver & Rio Grande Western Railroad founded Durango astride the Animas River in 1880. Racing to get to the rich mineral reserves of the San Juan Mountains, the railroad steamed into town on August 5, 1881, and in less than 11 months the tracks to Silverton had been completed. Since 1959 the Durango & Silverton Narrow Gauge Railroad has operated as a tourist train from May to October, with limited special trains in the winter and spring. The railroad makes it easy to customize an experience with different travel packages, including the adventurous Discover Silverton Package. When in Durango, enjoy the historic downtown district with its great variety of restaurants, pubs and specialty shops.

On September 17, 1901, the Santa Fe Railway launched the 64-mile Grand Canyon Railway from Williams to the Grand Canyon. The scenic line proved so popular the railway and the Fred Harvey Company built the El Tovar Hotel in 1905.  The Grand Canyon line remained a favorite of tourists until automobile tourism led to its closure in 1968. Passenger service restarted in 1989 as the Grand Canyon Railway, with daily service to and from the national park, plus special packages and train events, such as Steam Saturdays the first Saturday, May through October; the Pumpkin Patch Train, every weekend in October; and the Polar Express, November to January.

The Denver & Rio Grande Western Railroad’s San Juan Extension arrived in the Village of Chama in January 1881 and operated until the 1960s when economics forced it to close. Local boosters and preservationists worked to save the most scenic section of the line between Chama, New Mexico, and Antonito, Colorado, and the two states jointly bought the route, tracks and stations, opening the Cumbres & Toltec Scenic Railroad to passenger service in 1970. The 64-mile heritage railroad operates May 2 to October 31, 2018, and offers several fare packages and special trains, including firefighter and engineer school.

Gold was discovered near Lewistown in 1880, and the town became an important trading center. In 1903, after eight years of construction, the Montana Railroad connected Lewistown with the Northern Pacific Railway. In 1908, the Chicago, Milwaukee, St. Paul and Pacific Railroad purchased the line, and operated it as “The Milwaukee Road” until the 1980s. Today, the Charlie Russell Chew Choo keeps the spirit of the railroad alive with round-trip dinner train trips on a spur track from May to October and the popular North Pole Adventure in November and December.

Ely has been a mining town ever since gold was discovered in 1878. After the early 1900s copper boom, the Nevada Northern Railway was built in 1905-’06. The 162-mile line connected the mining districts, smelters and the city with the national transcontinental lines. After the smelter closed in 1983, the train ceased running as well. Soon thereafter, a portion of the rail line was saved and reopened as the Nevada Northern Railway, which operates passenger trains daily, with the exception of holidays and Tuesdays, except in July and August. The National Historic Landmark railway has exciting passenger car options, specialty trains and even hands-on engineer training.

An 1859 silver strike during the Pike’s Peak Gold Rush led to the founding of Georgetown. Mining continued to drive the growth of the mountain town, and in 1878 the Colorado Central Railroad reached Georgetown. In 1884, the engineering marvel, the Georgetown Loop, was completed as part of the Georgetown, Breckinridge and Leadville Railroad. While the silver economy did not sustain the construction of the line but to a few miles past Silver Plume, the line was rebuilt and restored in the 1970s and 1980s, and the Georgetown Loop Railroad & Mining Park is the centerpiece attraction for a long weekend in the historic town.

When in Georgetown, Don’t Miss: The Ride and Mine Tour packages on the Georgetown Loop Railroad. More info @ GeorgetownLoopRR.com and Georgetown-Colorado.org

A suburb of Austin, Cedar Park was originally Chisholm Trail cattle drivers’ George and Harriett Cluck’s ranch, which they founded in 1873. In 1882, the Austin and Northwestern Railroad crossed the Cluck Ranch en route to Burnet and Granite Mountain for access to the pink granite needed to construct the Texas State Capitol. The rail line eventually was expanded until its closure west of Llano in 1986. Today, the Austin Steam Train Association operates the Austin Steam Train on the Austin Western Railroad as a heritage passenger line.

After its 1857 fort closed, Fort Bragg became a lumber town, and in 1885, the Fort Bragg Railroad Company opened the first rail line to haul redwood timber from the forests to the coast. The line was eventually bought out, expanded and renamed the California Western Railroad & Navigation Company to Willits. While it remains a popular passenger line today, the 40-mile track also provided successful freight service until 2001. Today, the Skunk Train offers two major passenger trains: the Pudding Creek Express from Fort Bragg and the Northspur Flyer from Willits. Each train runs  January 1 to November 30. 2018, and December 26 to January 1, 2019.

The Rio Grande Western arrived in Heber City on September 21, 1899. The train was a major success for passengers and freight, livestock and crops for the region’s farmers and ranchers. When a paved highway reached Heber City in the 1930s, the end of the train was inevitable, but it held on until 1968. In 1970 a group of citizens, organizations and the state saved the line and it ran until 1990. In 1992, the Heber Valley Railroad was restored and operates as a historic passenger rail line. The train service runs from mid-January to early November. Check with the railroad for specific times, dates and specialty trains.

Virginia City was founded in 1863 soon after gold was discovered in Alder Gulch and gold mining continued in earnest until the 1930s. Today, Virginia City Historic District is a National Historic Landmark. The Montana Heritage Commission manages the historic town, once the territorial capital, as a living history center from Memorial Day to Labor Day. In 1964, town benefactor Charlie Bovey built the Virginia City Shortline Railroad to the ghost town of Nevada City. The tourist train runs 20 minutes one-way, seven days a week during the summer season, depending on weather and safety conditions.

When in Virginia City, Don’t Miss: The nightly performances of the Brewery Follies and The Virginia City Opera and the 6th Annual Bozeman Trail Chuck Wagon   Cook Off, July 27-29. More info@ VirginiaCityMT.com and VisitMT.com

Carson City was founded in 1858 and grew quickly after the Comstock Lode mineral strike in 1859. The Virginia & Truckee Railroad was completed between the state capital, Carson City, and Virginia City in 1870, and by 1872 it was connected to the transcontinental Central Pacific in Reno. The short-line connected the capital and the rich mining districts to the world and the towns boomed. With the mines mostly closed by the 1930s, the railroad eventually closed in 1950. In 1975, entrepreneur Robert Gray reopened the V&T and operates it as a tourist train between Memorial Day and October.

Joseph McCoy’s entrepreneurial vision of building stockyards and a drover’s cottage next to the end of the Kansas & Pacific tracks in Abilene, and advertising his services to Texas cattlemen in 1867,  created the legendary cattle drives era of 1867-1887 when cattle were moved from the Lone Star State to the wildly wicked Kansas rail heads. Abilene has maintained its connection to its Old West past through the Abilene & Smoky Hills Railroad, Old Abilene Town and the Dickinson County Heritage Center. The A&SHRR operates from May to October, with many exciting ride and tour opportunities for passengers, including steam-driven service on a limited basis, dinner trains and the Silver Flyer Railbus.

Hill City was founded in 1876 during the Black Hills Gold Rush. Early on, the mine owners of the Black Hills knew the rugged mountain region would need a railroad to make the mining of the rich underground veins profitable. Nevertheless, it was not until the 1890s that regular rail service reached Hill City. Over time, diesel locomotives replaced all the steam engines driving trains in the Black Hills. Since 1957, steam train entrepreneurs William B. Heckman and Robert Freer’s dream of the Black Hills Central Railroad’s 1880 Train has been thrilling passengers every summer.

Platted after the Civil War, the northwest Arkansas community of Springdale was incorporated in 1872. The Arkansas & Missouri Railroad line originated with the construction of the St. Louis-San Francisco Railway in the 1880s. The modern A&MRR was started in 1986, primarily for freight service, but it also has a popular passenger tourist line that keeps a regular, but limited, schedule from January to November. The A&M has two round-trip passenger train options: Springdale to Van Buren, and Van Buren to Winslow, both of which take tourists through the beautiful Boston Range of the Ozarks.

All Aboard a Historic Train!

Stuart Rosebrook, who first went on the Durango & Silverton Narrow Gauge Railroad in 1976, shared his love of the historic rail line with his family last summer.