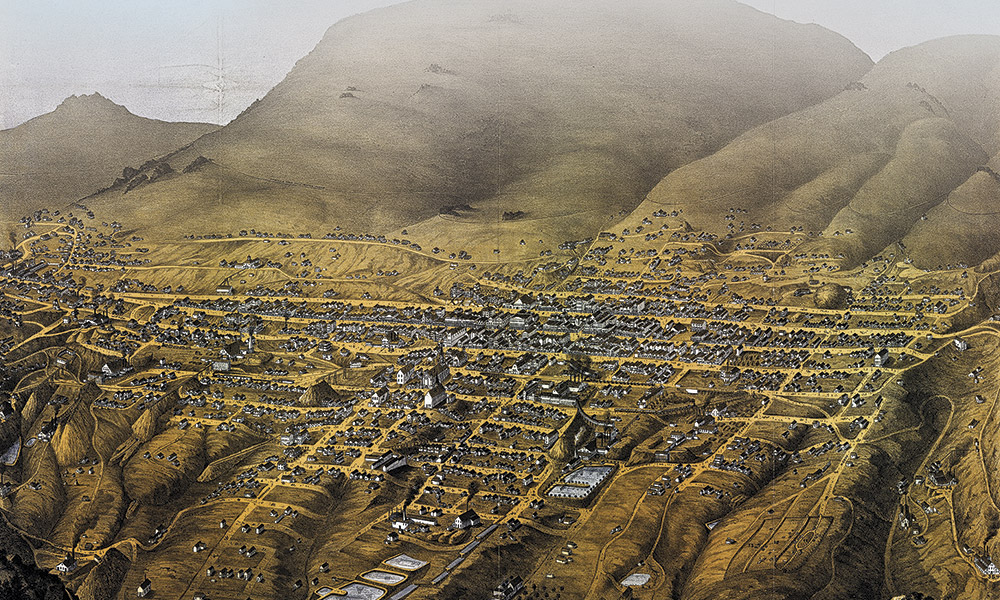 In its boom days in the early 1860s, Virginia City, Nevada, “royally roosted” midway up the steep slope of Mount Davidson, a boomtown visible from 50 miles away. We know that because the great Mark Twain said so in his 1872 memoir, Roughing It.

“It claimed a population of fifteen thousand to eighteen thousand,” wrote Twain, a reporter for the town’s Territorial Enterprise newspaper, “and all day long half of this little army swarmed the streets like bees and the other half swarmed among the drifts and tunnels of the ‘Comstock,’ hundreds of feet down in the earth directly under those same streets.”

Today, more than 1.5 million visitors a year come to town, and rest assured, it wasn’t built by Disney.

“You’d be surprised how many people ask that,” says Joe Curtis, Storey County’s director of emergency management, who also leads informal history tours. “They look around and can’t believe it’s real. But when you walk down C Street, most buildings you pass are originals dating
to 1862.”

A National Historic Landmark, the town became the largest of 22 settlements that sprouted after the 1859 discovery of the Comstock Lode, which produced $700 million in gold and silver in 25 years.

Rebuilt after a fire in 1885, the building features hand-painted backdrop scenery, a horseshoe balcony and elegant proscenium boxes above the stage.

In 1959, locals gathered at the Piper to see the premier of TV’s Bonanza. Ben Cartwright lived on the fictional Ponderosa near Virginia City, and frequent mentions of the town fueled a major tourist revival in the 1960s.

Miners dug more than 600 miles of tunnels under the Comstock, and visitors can get a glimpse into their lives on several mine tours. The Ponderosa and Chollar tours last roughly 30 minutes and feature up-close views of mining equipment, as well as underground shafts, drifts and stopes.

In the 1870s, some 45 trains a day left Virginia City hauling ore. Tourists relive the experience on the Virginia & Truckee Railroad to Gold Hill, where the big strike began. The train stops at the 1861 Gold Hill Hotel, where visitors can sit on the saloon patio and toast the Comstock men who swung pickaxes for their supper.

Stroll the boardwalk along C Street to The Way It Was Museum, a huge collection of documents and mining equipment, and the Red Dog Saloon, where Janis Joplin performed in the 1960s.

The Bucket of Blood Saloon has cool chandeliers and lots of old photos, and on weekend nights the Comstock Cowboys often rock the house. Don’t miss the Fourth Ward School Museum, the last four-story wooden Victorian structure standing in the U.S.

For accommodations, try the elegant Cobb Mansion B&B or Edith Palmer’s Country Inn, a charming 1863 Victorian. Marilyn Monroe and Clark Gable, stars of the 1961 movie The Misfits, stayed there during filming of the picture east of town.

Virginia City’s list of annual events includes the Hot August Nights car rally, in which hundreds of classic cars roll down the street, the Way It Was Rodeo, a rollicking good time at the fairgrounds, and the Grand Prix motorcycle races, which attract more than 1,000 riders.

At many of these events, the Tourism Commission rolls out a black hearse and sells locally made Cemetery Gin. As early labels promised, the drink is “guaranteed to embalm you while you’re still breathing.”

Imagine the fun of sipping Cemetery Gin while watching the 29th World Championship Outhouse Races. The October event kicks off with a parade of outhouses, followed by the competition to determine who will first break the toilet paper finish line.

To plan your trip, stop at the Virginia City Tourism Commission at 86 South “C” Street. Don’t forget to ask for information on historic walking and driving tours of the city.

The 1876 hotel has 28 restored rooms. Don’t miss the 15-foot portrait of the silver queen. She’s wearing a gown made of 3,261 Morgan silver dollars. The saloon alone is worth a look, for the massive bar and back-bar.

Visit the new Slammer Museum in the jail at the 1876 courthouse. “It tells about the lives of average people on the Comstock in the 1800s,” says Joe Curtis. Notice the statue outside the state’s oldest continuously operating courthouse. Lady Liberty isn’t wearing a blindfold and Curtis says no one is quite sure why.

Virginia City has been ravaged by fire several times, including the great fire of 1875, which destroyed 2,000 structures. Founded in 1979, the museum pays tribute to its firefighters with displays of photos and old equipment. See an 1839 Christian Hight hand-drawn, hand-pumped fire engine, Nevada’s oldest fire apparatus.

This 1859 structure has been restored to its original splendor. Some believe early guests included Samuel Clemens, Mark Twain’s real name. Twain fled town in 1864 after his tongue-in-cheek challenge to duel a rival newspaper editor became serious.