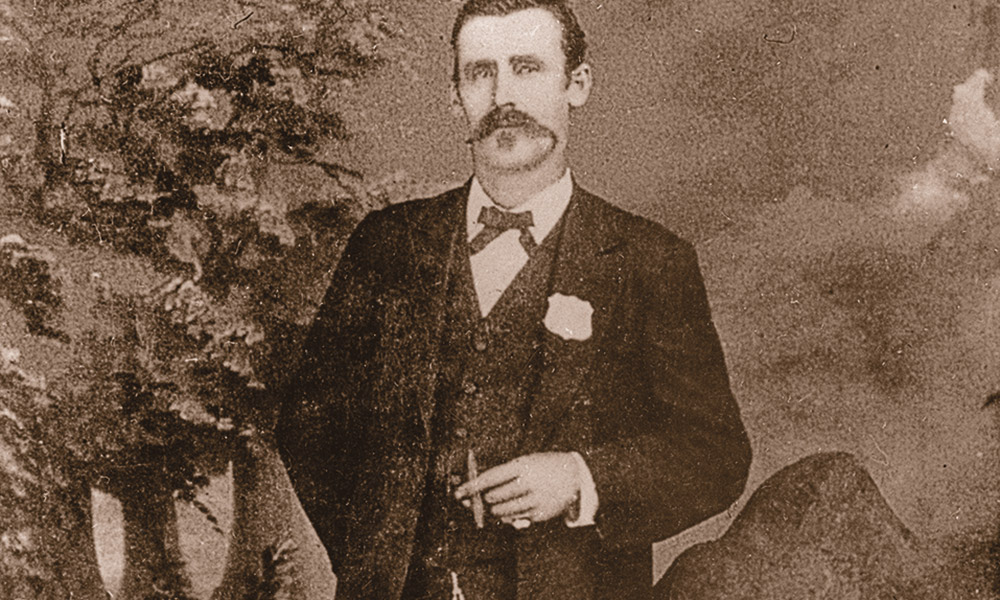 Out in the West Texas town of El Paso, ex-Marshal George Campbell is flat-out looking for trouble. “Any American that is a friend of Mexicans,” he booms, “ought to be hanged!”

Constable Gus Krempkau turns red. He has just finished assisting a group of Mexicans into the U.S. “George,” says Krempkau, as he slides his rifle into the scabbard aboard his riding mule, “I hope you don’t mean me.”

“If the shoe fits,” hoots Campbell, snapping his fingers in the air for emphasis, “then wear it.”

The drunk Campbell then turns to grab the reins of his mule, which are tied to a tree.

Hale instantly fires, and the bullet hits Krempkau near the heart, before exiting through his lungs.

Across the street, the Globe Restaurant doors blow open, and Marshal Dallas Stoudenmire emerges with a pistol in each hand. Close behind him is his brother-in-law, Stanley “Doc” Cummings, toting a shotgun.

As he takes in the scene on the fly, Stoudenmire steps lively into the street and snaps off a quick shot at Hale, who ducks behind an adobe pillar. Unfortunately, the marshal’s shot misses Hale and hits a Mexican citizen who has just bought a sack of peanuts. Hale pokes his head around the pillar. Stoudenmire’s second shot hits him in the head; he collapses, dead.

Drawing his own pistol, Campbell hastily backs into the center of the street and loudly says, “Gentlemen, this is not my fight.”

A dying Krempkau grits his teeth and squeezes off shots at Campbell. The first bullet smashes into the ex-marshal’s pistol and breaks his wrist. Campbell yells out and drops to the ground to pick up his revolver. Krempkau’s next bullet hits Campbell in the foot.

Defending his mortally wounded constable, Stoudenmire fires at Campbell. The bullet enters Campbell’s stomach, causing him to drop his gun a second time, as he topples face-down.

When Stoudenmire rolls Campbell over, Campbell sputters, “You big son-of-a-bitch, you murdered me!”

At 6 p.m., Marshal Dallas Stoudenmire  hears gunshots and exits the Globe Restaurant. Sizing up the scene, he attacks Johnny Hale and ex-Marshal George Campbell, who he assumes shot his dying constable, but he ends up killing an innocent bystander. Stanley “Doc” Cummings (far right), Stoudenmire’s brother-in-law and the owner of the Globe, steps off the sidewalk with a shotgun. He fires no shots. Backing into the middle of the street, Campbell tells them, “Gentlemen, this is not my fight.”

In George Campbell’s dying statement to the state’s attorney, as reported by the Mesilla Independent, he claimed Gus Krempkau had “hunted him up” and “called him out” for making “epithets of an opprobrious character” about helping Mexicans. Campbell insisted he had assured the constable he wasn’t angry with him, but was disturbed by the presence of the armed Mexicans in El Paso, Texas.

Krempkau was satisfied with Campbell’s explanation, but Johnny Hale misunderstood the encounter and shoved his revolver at Krempkau, telling Campbell “to draw that he had him covered.” Campbell told Hale, “It’s not my fight” and began to move away from the two men. Hale and Krempkau commenced shooting at each other, each receiving “death wounds,” but both continuing to shoot.

When Marshal Dallas Stoudenmire came on the scene, Campbell tried to assure him this wasn’t his fight, but Stoudenmire shot him anyway, breaking his right wrist. Campbell attempted to draw his revolver with his left hand, and the marshal “shot him through.”

Campbell lived until 5 a.m., when “death had set its seal upon him.”

The armed Mexicans were in town to claim the bodies of two Mexican vaqueros who had been ambushed and killed while trying to retrieve stolen cattle. Their bodies had been found on Johnny Hale’s ranch, north of El Paso.

At the inquest on El Paso Street, where the altercation took place, the assembled “Americans” were upset with the show of force. They unfairly blamed Krempkau for the Mexicans’ presence, as he had merely escorted them so they could take the bodies home.

The day before the shooting, and some 45 miles away in Mesilla, New Mexico Territory, the notorious Billy the Kid was convicted and sentenced to hang for killing Lincoln County Sheriff William Brady.

The Rise of the Cow-Boys