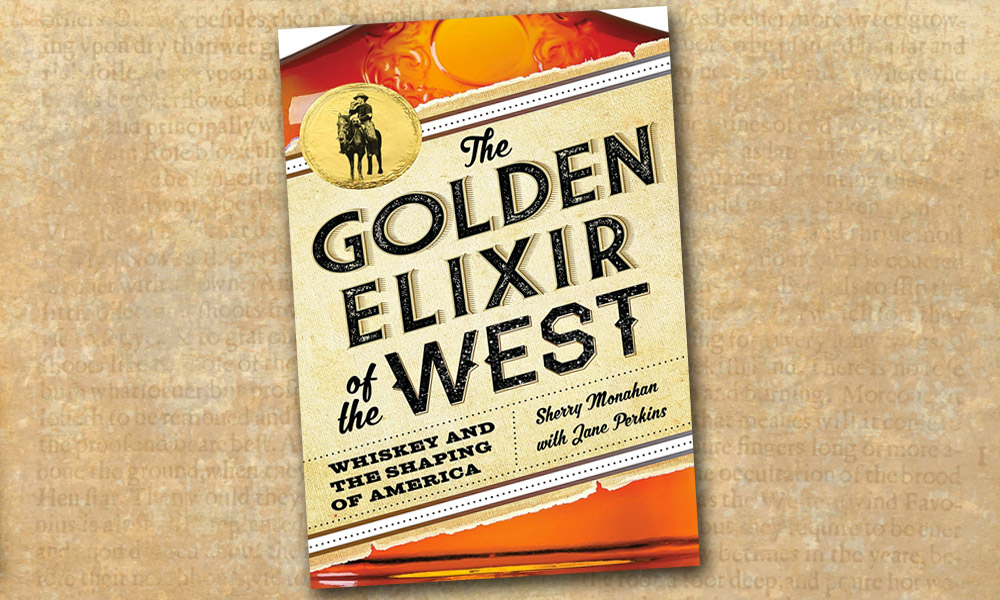 Is there a Western novel, film or television show in which a character does not order a shot or bottle of whiskey, let alone throw, break or shoot a bottle of the veritable Old West spirit?

Well, after a thorough search we might find one or two, but, after reading The Golden Elixir of the West: Whiskey and the Shaping of America (TwoDot, $24.95) by Sherry Monahan with Jane Perkins, we’d conclude it was probably an oversight if the production company or the author did not feature the iconically American corn liquor.

As Monahan and Perkins state in the introduction: “Whiskey was the golden elixir of the West and king of the distilled spirits. It was an integral part of the great western expansion and has strong ties to early explorers, pioneers, the railroads, and the cattle era.”

Both Monahan—who writes the “Frontier Fare” column for True West—and Perkins—who with her husband, David, founded High West Distillery, the first legal distillery in Utah since the 1870s—are enthusiastic and knowledgeable about their topic, which makes The Golden Elixir of the West a fun and informative read.

Beginning with the role of whiskey as a trade good in the early decades of exploration, trailblazing and fur-trading, through the expansion of the West, the authors chronicle the growth of whiskey as an industry, trade good and profitable commodity.

They expertly demonstrate whiskey’s  role in the building of the West—and the extent of its availability across the West after the Civil War during the construction of the railroads.

The fact that whiskey is a constant prop in the fictional West is no fiction: whiskey was omnipresent in America’s Western settlements, from sod-roofed prairie trading posts to Hell on Wheels railroad tent camps.

Only Prohibition kept American whiskey from reigning without competition as one of the most important economic commodities from the earliest decades of the Republic to the present: “When the repeal of Prohibition allowed whiskey back on the market, it was regulated and mass produced, and the love affair between the American West and whiskey was all but over,” according to the authors. “It can be said, though, that this golden elixir threaded western towns like the railroads threaded the country together.”

The well-researched book includes detailed endnotes and a fascinating appendix, “Liquor Laws and the Old West,” that chronicles the spirit laws of seven Western states in the 1880s and 1890s, an era that began the slow road to national Prohibition. The difference between North Dakota’s prohibitive laws of 1895, outlawing the “manufacture and sales of intoxicating liquors for sale or gift, and the keeping, selling, or offering of same for sale, etc.,” stood in stark contrast to neighboring Montana, which did not require physicians or druggists to have a license “for liquor used or sold for medicinal purposes.”

Monahan and Perkins, who obviously had fun writing the book, also include a history of whiskey mixology in their final chapter, “Belly Up to the Bar: Cocktails of the West.” So, while enjoying the lively prose, mix up a taste of history, sit back and enjoy. Cheers!