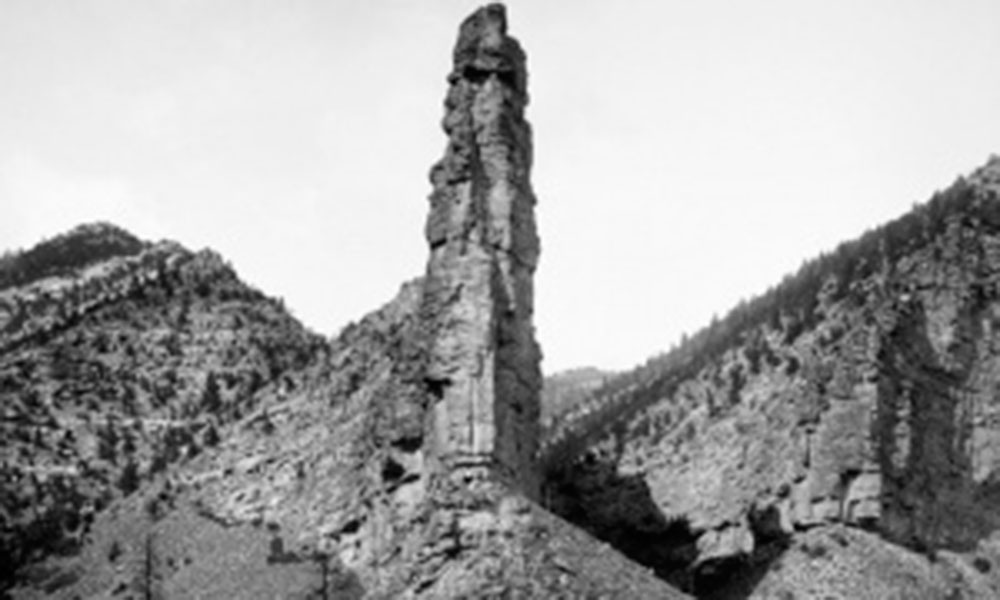 In the spring of 1894, Butch Cassidy was running a small outfit at Horse Creek in the Upper Wind River country near today, Dubois, Wyoming with a small-time stock thief named Al Hainer.  They had a clever scheme of selling protection money to ranchers to insure their cattle wouldn’t be stolen. If the rancher didn’t pay the fee his would find his cows missing.

They were driving three stolen horses to Star Valley when Uinta County sheriff’s deputy, Bob Calverly and rancher John Chapman, along with some local lawmen on the trail of suspected rustlers in the area, picked up their trail.  Hainer was captured and tied to a tree but when the possemen tried to arrest Butch, he went for his gun and fired a shot just missing one. Another fired a bullet that grazed Butch’s forehead. He was handcuffed and arrested for the first and last time of his life.

After several delays Butch and Hainer were finally brought to trial. Before the case could be heard a friend of Butch’s presented a forged bill of sale for the thirty horses.  Unfortunately for Butch, the man whose name had been forged appeared at the trial. Hainer seems to have cut a deal was acquitted but Butch was sentenced to two years in the Wyoming prison at Rawlings.  He was a model prisoner and was released serving eighteen months.

Rather than go straight, Butch resumed his career in crime soon after he got out of prison.  On August 13th, 1896, he along with Elzy Lay and Bub Meeks robbed the bank at Montpelier, Idaho of more than $7,000 to raise money to pay the attorneys who defending their pal Matt Warner on a charge of murder. Castle Gate, Utah would be their next job.

Castle Gate, was nestled in a long narrow canyon. There was only road leading in and out of town. It was a company town, the home of the Pleasant Valley Coal Company and owned by the Denver and Rio Grande Railroad. Every two weeks the payroll arrived from Salt Lake. In order to discourage robbery the company used an irregular schedule. A whistle would blow at the trainmaster’s office to alert the workers to come and collect their paychecks.

Butch was lounging in front of the company store around the corner from the stairs that led to the paymaster’s office.  He saw the paymaster come down the stairs with his assistant and walk over to the station to pick up the payroll from the express car messenger and a clerk. The money was in a leather satchel along with three bags of gold coins.

As they approached, Butch moved over by the stairs. Elzy was mounted and holding the reins of Butch’s horse.

When the paymaster reached the stairs Butch stuck his pistol in his face. “Drop the sacks,” he demanded. The messenger meekly obeyed but the clerk made a run for it with one of the bags.

Butch picked up the satchel and the two remaining sacks and tossed them to Elzy, who caught them but dropped the reins causing Butch’s horse to bolt. Elzy rode after the horse and turned him so Butch could grab the reins and mount up. In seconds they were riding hell-for-leather out of town. The take was almost $9,000.

The paymaster ran to the telegraph office to wire for help but Walker had climbed the telegraph pole and cut the line. Butch’s was very skillful at planning a job. He’d leave supplies along a well-scouted trail and a relay of horses. During the getaway the outlaws would always have a fresh supply of mounts leaving the pursuing posse either afoot or on tired horses. Other gang members were posted along the escape route to guard their backs.