One of the best ways to understand a people is to know what makes them laugh. Laughter encompasses the limits of the soul. In humor life is redefined and accepted. Irony and satire provide much keener insights into a group’s collective psyche and values than do years of research. —Vine Deloria Jr., in Custer Died for Your Sins

“Why do you insist on calling yourselves Indian?” asks a white woman in a nice hat. “It’s so demeaning.”

“Listen,” I say. “The word belongs to us now. We are Indians. That has nothing to do with Indians from India. We are not American Indians. We are Indians, pronounced In-din. It belongs to us. We own it and we’re not going to give it back. So much has been taken from us that we hold onto the smallest things left with all the strengthwe have.”

—Sherman Alexie, “The Unauthorized Autobiography of Me,” from Alexie’s book One Stick Song

The Many Laughs of In-Din Women

In-din women have many different laughs. Sometimes, their laughter is loud and aggressive, and can cut to the quick. Other times, with a slight inflection, it can be gentle and supportive. And then there is the howling laugh, where they all hit a high-pitched yell that almost breaks windows. Believe me, you will know if they are laughing with you or at you!

As for the Boy General, who died at the hands of Indians during the famous 1876 Battle of the Little Big Horn, Deloria Jr. quipped, “Indians say that Custer was well-dressed for the occasion. When the Sioux found his body after the battle, he had on an Arrow shirt.” 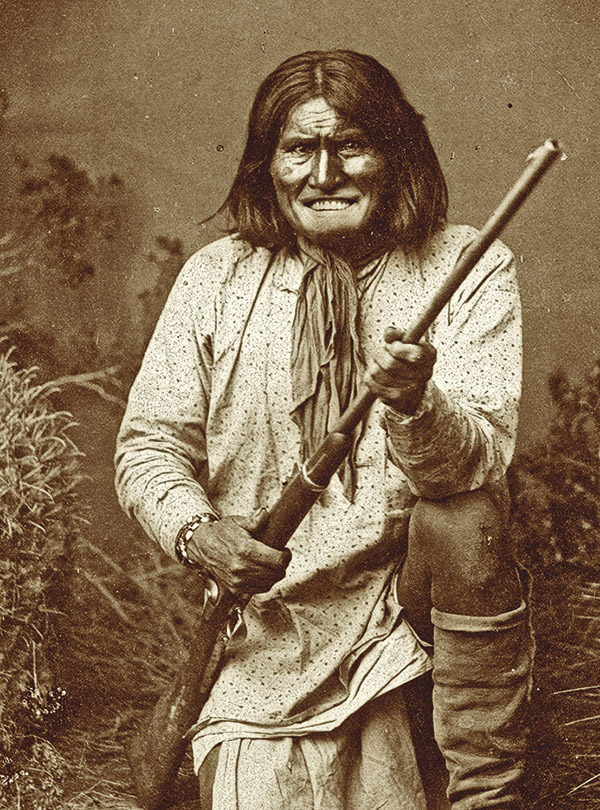 Ear to the Ground

A popular Mojave joke: Two cowboys are riding along when they come upon a Mojave lying on his stomach with his ear to the ground. One cowboy says to the other, “These Mojaves are amazing. They can listen and hear things for miles in any direction.”

The In-din looks up and says, “Covered wagon, about two miles away. They have two horses, one brown, one white. Man, two kids, all their belongings in the back of the wagon.”

Both cowboys are stunned. “How in the heck do you do that?” The Mojave says, “Ran over me about a half hour ago.”

If a Chickasaw man marries a woman who is half Potawatomi and half Hualapai, what do you call their kids? Chicken Pot Pie.

White Man’s Pants Under the Pillow

University of Oklahoma Dr. E.E. Dale, who often traveled around the old Indian Territory for the Federal government, related how a prominent chief noticed the doctor’s habit of folding his pants and placing them under his pillow before retiring.

The chief asked, “Why you put pants under pillow, huh?”

The doctor replied, “All the money I have in the world is in my trouser pockets, and I am afraid somebody might steal it.”

Now, here a story about foolish people who lived near Mescalero. A Mescalero man was married to one [of the foolish people], so he had to live with his wife’s band. These people did not wear many clothes, nor have houses. They had no horses, and when they found a horse, they had no idea what to do with the animal. They did not know how to get on a horse either, or so they say.

One day, this Mescalero brought his horse to the camp. No one knew what to feed him. They did not know what to call him. The people call council to discuss. Some people tried to feed him white gravy. Horse not like it at all. Then they tried coffee. They tried mescal and venison and all other food in camp. That Mescalero warrior laugh and laugh. Finally, he took his horse to grassy area, and the horse ate and ate. The foolish ones cried out, “Look, he must like grass.”

Then everyone wanted to ride the horse. One jumped on, but faced the back. Another tried and fell off. Finally, that Mescalero got on and rode around…he loped and ran horse. And the foolish people say that Mescalero must have put pine pitch on his backside to keep him on right.

—As told by Percy Bigmouth, a Lipan-Mescalero Apache, published in original, ungrammatical form, in Apache Legends and Lore of Southern New Mexico by Lynda A. Sánchez

The idea that Indians aren’t funny is so funny. 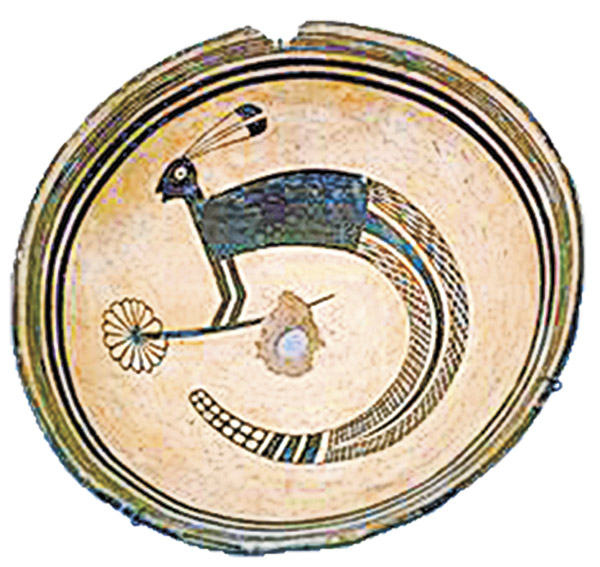 Well, not quite. This image shows an In-din jackrabbit with a lizard’s tail and a rattlesnake’s cascabeles (rattlers). Lynda A. Sánchez explains:

For many centuries, the ancient Mimbres culture, a branch of the Mogollon in southern New Mexico, have designed motifs on the tribe’s now-famous ceramicware to express humor. Some designs are comical, while others show predicaments in which man finds himself. Creations of half-animal, half-man are common, while others combine animals, such as the jackrabbit-lizard-rattlesnake shown here. A thousand years after the Mimbres’ departure from the valleys surrounding Silver City, New Mexico, that same celebration of humor can be found among the Pueblo peoples of today. 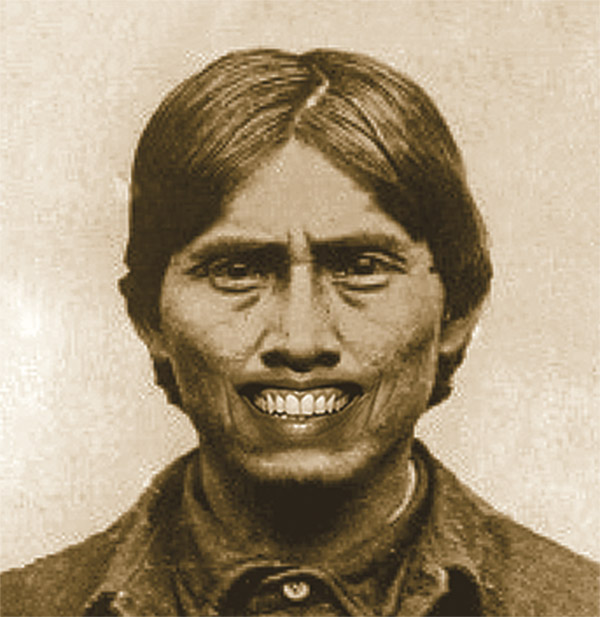 During one interview with Apache historian Eve Ball, Asa Daklugie (nephew of Geronimo and son of Chief Juh) described the land of Ussen or Apache Heaven.

Daklugie told Ball that she needed to stay in their heaven, a place so serene and beautiful; no noise, pure rushing water, rugged mountains, tall pines.  White Man’s Heaven was loud, too many people and big cities, pollution, just the opposite of theirs.

Ball laughed and agreed with the warrior, but she claimed, “Well, all that you say may be true, but I love books and libraries. I could not be happy without them.”

Daklugie smiled wickedly, with a gleam in his eye, and responded, “Well, Ms. Ball that is no problem for an Apache. We will just make a raid on the White Man’s Heaven and bring you all the books you want!” 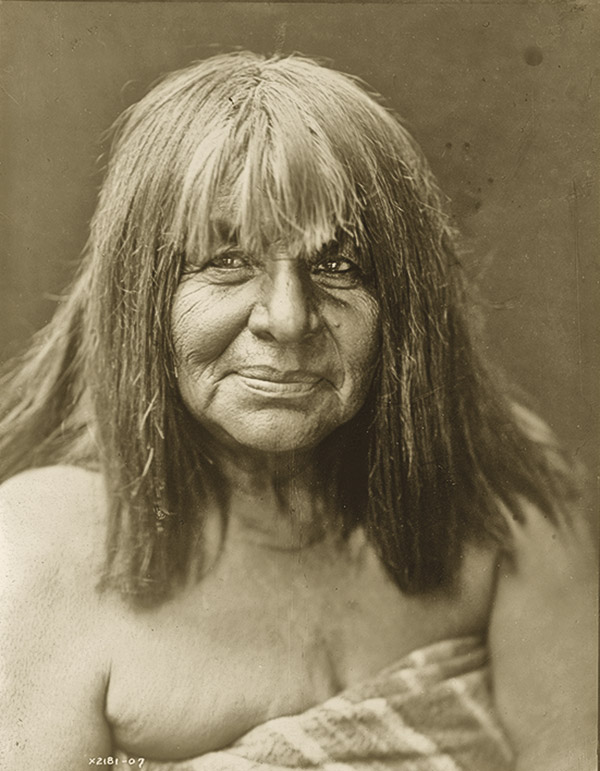 I grew up in a village of about 269 people, just south of the Aleutian Islands. I come from a very close knit community, and we celebrate all the time. Birthdays, weddings, graduations, elections, impeachments. We even celebrate when one of our bootleggers gets out of jail; we hold a big party, with seal meat, rabbit and, of course, the blubber—the food of gods! Next to the luncheon meat we get from the monthly commods [In-din slang for “commodities”], nothing beats blubber.

Every time my old, late friend Floyd Red Crow Westerman was introduced to someone who claimed a Cherokee grandmother, he would turn them around and look at their butt and say, “I can usually tell by the high cheekbones.”

—Musician Bobby Bridger, who, with actor Wes Studi, is producing the audiobook of Vine Deloria Jr.’s final book, The World We Used to Live In: Remembering the Powers of the Medicine Men

Years ago, the Dog Nation hosted an enormous sweat, and their cousin Coyote had begged to join their sacred lodge. The old leaders of the sweat remained skeptical (Coyote was so unpredictable and had a reputation for foolish behavior), but allowed Coyote to participate.

Before he could join in, the Dog Nation leaders informed Coyote about their strict ceremonial rules. Their number one rule: Dogs always kept a proper order when entering and exiting the lodge. Before entering, Dogs stripped and then hung up their furs in precise order on an old tree with low branches that stood outside the lodge. After they stripped, they lost their senses of sight and smell. At the end of every meeting, they exited the sweat lodge and followed a precise order to retrieve their proper fur.

On the evening of the ceremony, Coyote showed up late. The rocks were inside the lodge, and the first round was about to get underway. Before the lodge flap closed, a panicked Coyote took off his fur and threw it onto the tree. The weight of his fur shook every single limb, and all the furs fell into a big pile.

Fearing he might upset his hosts, Coyote acted fast and  hung up all the furs out of order. He was the last to enter and the first to exit the lodge.

After the ceremony, it was pitch black outside. One by one, the Dogs followed Coyote and began to dress in their fur coats. Coyote never mentioned his clumsiness to them.

The next day, after each Dog awoke, they discovered that they wore the wrong fur and eyes. Coyote’s mistake is why Dogs will sniff another Dog’s butt when they first meet—they are still searching for their missing hide.

A Plague of Cherokee Princesses

Why do so many Americans persist in believing they have Cherokee blood? And why do so many of us believe we descend from a “Cherokee Princess?”

Where did this In-din envy come from, and why focus on the Cherokee tribe?

The best answer I’ve found was given by Gregory D. Smithers, author of The Cherokee Diaspora, who wrote this for Slate Magazine:

“Throughout the South in the 1840s and 1850s, large numbers of whites began claiming they were descended from a Cherokee great-grandmother. That great-grandmother was often a ‘princess,’ a not-inconsequential detail in a region obsessed with social status and suspicious of outsiders.

“By claiming a royal Cherokee ancestor, white Southerners were legitimating the antiquity of their native-born status as sons or daughters of the South, as well as establishing their determination to defend their rights against an aggressive federal government, as they imagined the Cherokees had done. These may have been self-serving historical delusions, but they have proven to be enduring.” — Bob Boze Bell 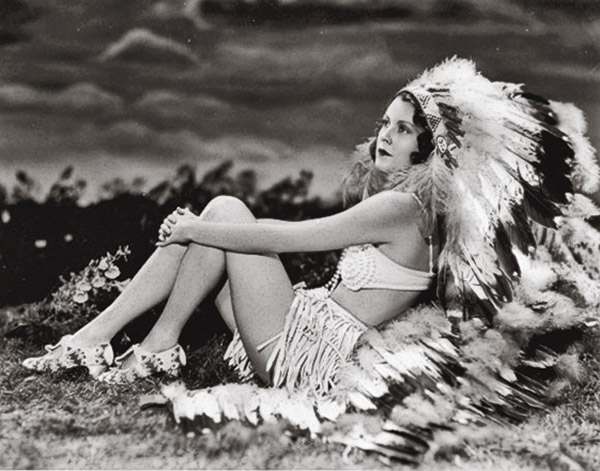 Things  In-Dins would like to Say to a White Person

3) I learned all your people’s ways in the Boy Scouts.

4) My great-grandmother was a full-blooded Canadian princess.

7) Do you live in a covered wagon?

8) What’s the meaning behind the square dance?

9) What’s your feeling about riverboat casinos? Do they really help your people, or are they just a short-term fix?

Kent Blansett is a Cherokee, Creek, Choctaw, Shawnee and Potawatomi descendant from the Panther, Blanket and Smith family lines. He is also an associate professor of History and Native American Studies at the University of Nebraska in Omaha.